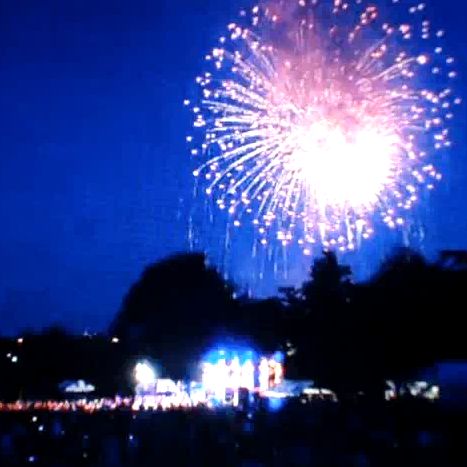 I remember when Paul McCartney was offered to play the Super Bowl Halftime show, he said something to the effect of it being “the greatest opportunity of his lifetime.” I chalked that up to him being an affable brit, and quite possibly forgetting he was in The Beatles at one point in time. But The Killers playing The White House on 4th of July might actually be some sort of zenith for them, something for Old Man Flowers to tell his grandkids as he dandles them on his knee.

President Obama and First Lady Michelle hosted more than 1,200 military heroes and their families on the lawn of the White House last night in celebration of The 4th. The concert bill featured many great acts in addition to The Killers: Barack Obama, Cedric “The Entertainer”, Brandi Carlile, and our National Capital 4th Of July Fireworks Display.

Opener President Obama kept it concise, and avoided a boilerplate flag-waving Independence Day platform, instead opting for a heart-felt, passionate speech saluting our armed forces with words pregnant with patriotism and love for his country. You can tell this guy’s got some chops, and expect him to see him at bigger venues in the near future. Only complaint is I wish he would have thrown in a John Cougar Mellencamp cover or something.

And so then a little bit later The Killers, fresh off/on their hiatus, came out and did a truncated show leading into the fireworks display. The band didn’t skip a beat, pounding out singles from their catalogue while Flowers commanded the the stage. Highlights include God Bless America which comes off as one of the more earnest things The Killers have done recently, and When You Were Young into the fireworks display is most grand indeed. Check out the videos below.

Flowers’ solo album, Flamingo, is due out September 14th via Island Records.

The Killers Setlist:
Intro
Human
Somebody Told Me
Mr. Brightside
A Dustland Fairytale
God Bless America
Read My Mind
When You Were Young