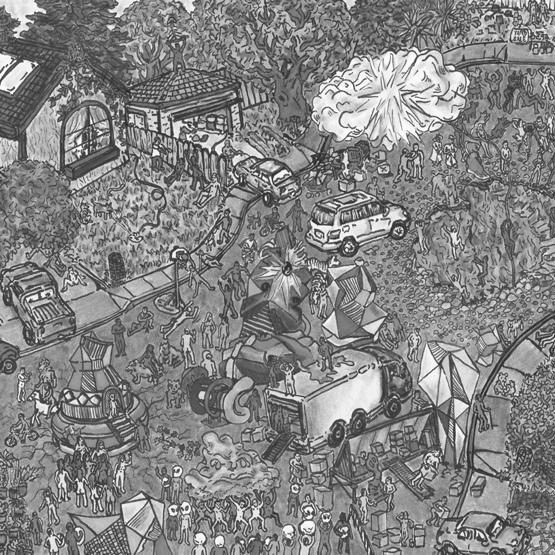 Childish Gambino is the nom de plume of Donald Glover, whom you Community fans watch every Thursday as Troy Barnes, in nightclubs doing stand up, or as a member the comedy group Derrick Comedy. And while the pedigree of this rising comedic star clearly screams a bright future of making you laugh, Mr. Glover has a hobby that is just as pleasing to the ears: rapping. Forget the joke raps of that Aziz Ansari mixtape, Glover has released four other mixtapes since 2008 full of great lyricism and banging beats. For Culdesac, Gambino displays all the qualities of a premier MC and makes you wonder if he should re-evaluate his career priorities.

The big trend for major rap releases in recent years seems to be a highly emotional sensibility, combined with faux singing. and an attitude of sheer dominance peppered with constant reminders of how much money they have, how all the ladies love them, and, in general, how much better they are than every other male in the known world. Thankfully, Gambino is running right along with the rest of the pack. But while Drake fumbled with overly gushy tracks that bordered on saccharine garbage, Gambino, through a sense of showmanship and an understanding forged by his other theatrical career, knows how to tow the line.

“Got This Money” sounds like a Kanye West-esque semi-dancehall techno banger. But between rapid fire displays of flow, Gambino tinges the club-friendly beat with R&B-ispired falsetto, creating a show for the ears by calling out for a girl without relenting his utterly wondrous shallow lifestyle. “So Fly” even sounds like it could be sung by some weird hip-hop barbershop quartet, reminiscent of the kind of love song pre-addiction Bobby Brown may have hummed, although this one has a big, boomy step up in tempo to let the sentiment burn out to. And that kind of magic continues in “Put It In My Video”, a mutant Bollywood dance track that pops with lots of sitars done as if they were played by robots. It’s utterly infectious and right in line with the Kid Cudi’s and Lil Wayne’s of the world, the men who should be Gambino’s contemporaries.

And while he’s clearly in his wheelhouse with the aforementioned tracks, Gambino flourishes in a place where many MCs have seemingly floundered: legitimate displays of emotional vulnerability and heartache. Beginning in the stripped down, manic plea of space baroque pop called “I’m Alright”, the listener gets a sense of how a little bit of dinero and a few minutes in the spotlight, built on years of anger and oppression from being a fat broke kid from Stone Mountain, GA to now living the dream in NYC, can quite thoroughly fuck someone up. That narrative is rife not only with sorrow, but a sense of invincibility, where despite his countless fatal flaws, he’ll continue to burn himself and the world down (sung oh-so proudly in the album’s anthem, “Fuck It All”.) But the most connecting moments on the album feature a more clear cut emotional plea, like “I’m On It” and his desire to settle down and “stop having crushes on all my friend’s girlfriends.” It’s also the only glimmering bit of hope, a song where he’s convinced he can “rearrange fate when I rap on bars.”

Two of the album’s tracks, “Hero” and “Glory”, are epics of Gambino’s majesty. That feeling is composed of a self-assured swagger and a corresponding feeling of inadequacy. They’re hopes for the future and better things to come and a resolution to destroy the here and now. But mostly, they’re evocative and worthy of some solid head-noddding. Childish Gambino could be the shot in the arm hip-hop needs, and that’s no joke.