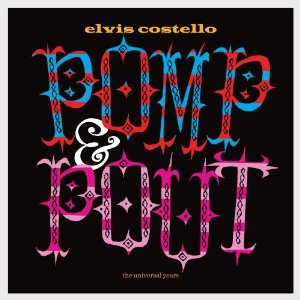 While the need for a compilation documenting Elvis Costello’s first decade of recording under the Universal umbrella may be debatable, it’s certainly no stretch to suggest that this was one of the iconic singer-songwriter’s more eclectic, experimental, and collaborative periods. Painted from Memory paired Costello with legendary composer Burt Bacharach on a stirring set of perfectly structured pop songs. When I Was Cruel recalled his disgruntled, if not brutal, youth. Longtime Attractions and Imposters band mate Steve Nieve accompanied Costello on the piano ballads of North. The country-tinged The Delivery Man featured vocals from country stalwarts Emmylou Harris and Lucinda Williams, and Momofuku, written and recorded in only a few days, owed its rocking edge to Costello’s chemistry with indie-everything Jenny Lewis. Throw in a collaboration with Allen Toussaint for disaster relief, a live jazz record with the 52-piece Metropole Orkest, and an opera commissioned by an Italian dance company, and Costello may likely be the music industry’s leading genre-hopper.

Pomp & Pout: The Universal Years attempts to sample from and do justice to the aforementioned forays and projects in a tidy 18-track collection. And like most compilations, it’s a bit of a hodgepodge with almost zero cohesion. For example, while listeners may never tire of hearing the aggressive punch of “Stella Hurt” or the glowing barnburner “No Hiding Place”, to follow them with the melancholy and orchestrated “This House Is Empty Now” makes for a rather awkward transition. With Costello having tackled so many styles in the previous decade, this collection really can’t help but make the listener feel bounced around like a pinball at times.

However, what separates Pomp & Pout from many compilations—and what listeners should really appreciate—is Costello’s noticeable hand in selecting the tracks. Sure, there are the radio-friendly “45” and “Monkey to Man”, but this is far from being a mere collection of singles. Instead, Costello seems to make it a point to choose songs that really map out where he has been creatively. No track could better encapsulate The Delivery Man than the underappreciated “Country Darkness”, which wanders gently in between Costello’s raw, vocal outpourings.  “When I Was Cruel No. 2”, which adds, subtracts, and builds piece by piece, largely reveals how Costello wrote When I Was Cruel alone using a guitar and machine-played beats. Costello also has the good sense and taste to include b-side treats “Impatience” and “In Another Room”, not to mention the infectious groove of “My Mood Swings” from The Big Lebowski soundtrack.

Costello completists won’t find anything here that they haven’t heard before, and no doubt they’d prefer to revisit these songs in the contexts of the original albums. But for those in Elvis’s army who didn’t follow Costello down certain musical paths that strayed too far away from his signature pub rock/new wave sound, Pomp & Pout offers a taste of what was missed.  “Still” showcases the eloquence and beauty of the North sessions, with Costello’s voice softly set to delicate piano arrangements (the opposite of his singing on the better known Painted from Memory). “The River in Reverse”, from the album of the same name recorded with Allen Toussaint, delivers funk with equal parts despair and outrage in response to the Hurricane Katrina catastrophe.

So, for those who have lost touch with Costello over the years—or simply haven’t been able to keep up with such prolific output—Pomp & Pout is a perfect means of playing catch-up and getting reacquainted. For those who have been with him at every turn, his new record, American Ransom, is slated to be released later this year.