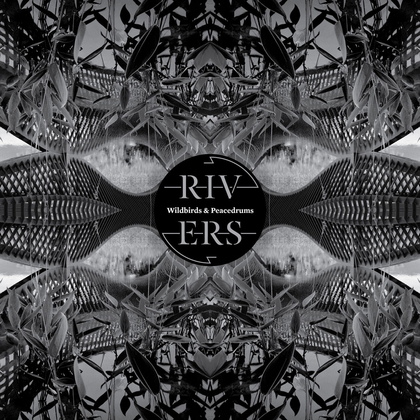 So what is it about Sweden? The Scandinavian country seems to have a never-ending supply of new and captivating music to give the world. And this supply is a diverse one at that, ranging from the indescribable uniqueness of The Knife to the infectious pop of Miike Snow and Lykke Li, and from the electro soul of Little Dragon to the experimental folk duo Wildbirds & Peacedrums.  Already having released two acclaimed albums and extensively toured the world, including a support slot for St. Vincent on her recent US tour, the wife and husband duo Mariam Wallentin and Andreas Werliin that make up Wildbirds & Peacedrums are not exactly new to the scene. Their latest release is the double album, Rivers. Comprised of Retina and Iris, two EP’s previously released in limited quantities, Rivers is as emotionally reflective as the bodies of water that are its namesake.

Retina begins with the Schola Cantorum ReykjavÃ­k Chamber Choir on opening track “Bleed Like There Was No Other Flood”, and the ominous sound of the choir combined with Wallentin’s haunting vocals hint at something gloomy and immense. Whatever emotions Retina is meant to reflect seem to be dark ones. The sparse percussion on “Bleed” is replaced by a prominent, driving drum rhythm on “Tiny Holes in This World”, while the layers of singing continue to mystify. A shadowy atmosphere continues to build with “Under Land and Over Sea”, with Wallentin at her most eerie. The river of Retina just might be reflecting the vast abyss of space, with nary a star in the sky, and certainly not a moon. Retina was recorded in an Icelandic church, so it is only natural that everything comes together for a new form of gospel at the end for the epic “Peeling Off the Layers”.

Although it shares the same watery theme as Retina, Iris sonically contrasts with its companion. Instead of soaring choirs, the songs are more minimal and center on Andreas Werliin’s percussions. Iris opens with a steel drum on “The Wave”, and it is the tropical sound of the steel drum that defines the EP, contributing to a warmer and lighter tone in comparison to Retina. If Retina is the reflection of the darkest night, then Iris is a reflection of a luminous day without overcast. Iris is at its warmest on “The Course”, with Wallentin sounding her most upbeat. On the closing track “The Well”, the intensity of the steel drum is drastically increased to the degree of relentless, giving Iris a different kind of grand finale.

The respective collections of songs on both Retina and Iris are certainly cohesive, almost to a fault. One of the most intriguing aspects of 2009’s The Snake is its unpredictable nature throughout the album. Although this may not have continued on Rivers, it’s a gripping exploration of new sonic territory for Wildbirds & Peacedrums. While both Retina and Iris are exceptional EP’s in their own right, it’s when bundled together as Rivers that they make for a most compelling example of contrasts.