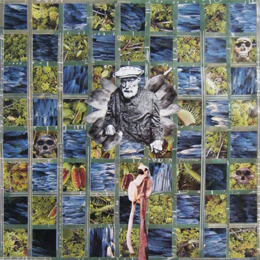 The union of Florida natives, John Hancock and Brian Robertson, has been continuously marked by a cavalcade of delightful pop rock melodies which have repeatedly forced fans of Awesome New Republic to smile jovially and bob around in unison. And this year marks the exciting new release of ANR’s sophomore record Stay Kids.

Currently, very little information has surfaced about the record other than its vague release date for “October of this year” and that it will be released via 10K Islands. However, ANR was nice enough to unveil the albums full tracklisting, album artwork, and a few other goodies including a free download of the album’s first single entitled “The Endless Field of Mercury” available on their website.

Directed by Jamie Harley (the known but not well-known director of other music videos for the likes of Memoryhouse, How to Dress Well, and Memory Tapes) the video for “The Endless Field of Mercury” is set on the stage of a ‘70’s-esque beauty pageant entitled “Young American Miss” as the host announces the pageants finalists. Filled with both happiness and sadness, “The Endless Field of Mercury” draws in the audience with hazy colors and slightly unfocused shots that seems to create halos around some of the young ladies’ heads. While simplistic in its nature it’s still both beautiful and poetic leaving room for many different interpretations of its content. I’d like to think it’s drawing peoples attention to the relationship between beauty and looks as perceived by the media. What do you think?