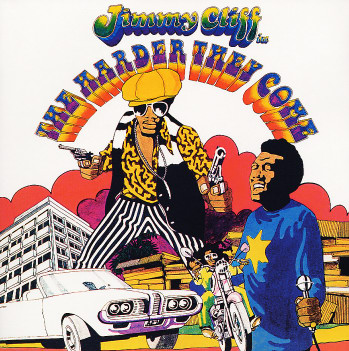 On the surface The Harder They Come is the soundtrack to the 1973 Jamaican crime film of the same name. To look just over the horizon of the title credits is to discover a collection of some of the best Jamaican artists ever to hail from the island. The producer credits are four men deep but their combined resumes would pretty much cover every person in the history of ska/rocksteady/reggae up to that point in time. The success of both the album and the film launched the career of Jimmy Cliff onto the superstar level and gave reggae a foothold in the American music market through its new found exposure.

The songs on The Harder They Come were all written and recorded between 1967 and 1972, with the lion’s share performed, written and/or produced by Jimmy Cliff. Legendary “king of ska”, Desmond Dekker makes an appearance as do Toots and the Maytals, Scotty, the Melodians and the Slickers. Cliff and Leslie Kong, Cliff’s manager/producer and one of the most influential people responsible for the international success of Jamaican music, produced the majority of the album’s 12 tracks. Other legendary Jamaican producers Derrick Herriot and Byron Lee produced Scotty and the Slickers respectively.  Looking back with the benefit of aural hindsight we have all heard the majority, if not all, of these songs since this album’s release, but at the time this album was a watershed event.

Scotty’s track “Draw Your Brakes”, produced by Derrick Herriot, was a deejay arrangement of Keith & Tex’s “Stop That Train”.  The song features a mellow, groove and is almost dizzying at points as it loops around Scotty’s proto-dub vocals. Scotty’s singing style pre-dates what would become “sinjay”, a style of singing that became popular in late ’70s Jamaica, similar to a toaster. Its name is derived from a conjugation of deejay and singer. The song was later used in another film, Guy Ritchie’s Snatch.

The other single producer credit, Byron Lee, had been involved in the Jamaican music scene pre-dating ska in the early ’50s. His role had evolved from band leader to become producer, entrepreneur and touring/recording artist by the time the Slickers recorded their now legendary “Johnny Too Bad” in 1970. The song, a dark description of the lives of a rude boy and a serious warning to those romanticizing the lifestyle, would go on to become one of the most celebrated songs recorded in Jamaica. From the beginning, controversy surrounded the song regarding songwriting credits with history eventually pointing towards band member Trevor Wilson being both the author of and protagonist in “Johnny Too Bad”. When I hear this track I often think of Bob Marley’s “Johnny Was” as the perfect follow-up, topically if not musically at least.

Leslie Kong was one of the earliest and most successful producers in Jamaica from the days of ska through reggae. Kong was behind Bob Marley’s earliest recordings “Judge Not” and “One Cup of Coffee” and was Jimmy Cliff’s producer, manager and mentor until his unexpected death in 1971. Four tracks on The Harder They Come feature the gentle caress of Kong’s production.

His work on the Maytal’s “Sweet and Dandy”, a song about a poor rural wedding, carefully mixes the vocal talents of the three Maytals with backing vocals provided by the Dynamics. On “Pressure Drop”, one of the Maytal’s most popular songs (and covered by the likes of the Clash and the Specials) is demonstrative of the call-and-response songs often typical of their more spiritual songs while at the same time being harmony driven like “Sweet and Dandy”.

The Melodians “Rivers of Babylon” is an interpretation of Psalm 137 re-written for a black audience. The spiritual message behind the song is undeniable and through the delicate treatment by both producer Kong and the sweet harmonies of the Melodians, the psalm was transformed into a Rastafarian prayer for a return to Zion. Despite the original source’s violent end, the Melodians chose to end their song on the more positive and truly spiritual note.

The final track produced by Leslie Kong was Desmond Dekker’s smash “007 (Shanty Town)”. Dekker’s classic calls to the rude boys, thug-like hoods who shot their way through the shanty-towns of Jamaica’s poorest neighborhoods. “Shanty Town” contains mentions of hip elements like James Bond and the Rat Pack and at times can be a minor glorification of the rudeboy culture, however, in the end the song warns against the lifestyle and its dangers. “Shanty Town” along with another hit “Israelites” would propel Dekker to stardom in the U.K. Desmond Dekker would eventually achieve a level of influence comparable to Bob Marley.

Leslie Kong was more than a producer to Jimmy Cliff. The man not only “discovered” Cliff as a young 14 year old kid singing in Kong’s studio streetfront, Kong mentored him for his entire career. When Kong died from a fatal heart attack in the summer of 1971 Cliff was at a loss both personally and professionally. It was during this time that Cliff wrote “Sitting In Limbo” and “Many Rivers to Cross”, two of Jimmy Cliff’s most intimate and hauntingly personal recordings. “Many Rivers to Cross” is one of the most beautiful and spiritual pieces in Cliff’s entire catalog. Cliff sings with the deeply personal cry of a lost soul searching for answers; the confusion in his personal life paralleled in song. I recall a conversation with bassist David Hood about the “Sitting In Limbo” recording session when Jimmy Cliff worked with Muscle Shoals Sound. He described Cliff as literally lost without Kong and this song was one of the first attempts of Cliff to deal with it. After years of being produced by Leslie Kong, Jimmy Cliff decided to continue forward choosing to produce himself rather than replace Kong.

Jimmy Cliff’s “You Can Get It If You Really Want” opens the album up (and appears again near the end). The Cliff penned tune captures the author’s (and film character’s) sentiments of rising up out of the dust and mud of the shanty towns and making something of oneself with the right attitude and determination. It also symbolizes the recent internal conflicts he had been suffering after the loss of mentor Leslie Kong and his strength and determination to keep going. Of course in the film the character takes the criminal path, however, lyrically this is a very positive and uplifting song. The original recording was by Desmond Dekker, at the insistence of Kong. Dekker’s version became a hit in both Jamaica and the U.K. When it came time to record his version for the film two years later, Cliff took the exact same recording of Dekker’s original single and simply removed Dekker’s vocal tracks, recording his own in their place.

The fourth and final track recorded and produced by Jimmy Cliff was the title track “The Harder They Come”. Like “You Can Get It…”, it appears on the album twice. Much along the same theme as “You Can Get It If You Really Want”, “The Harder They Come” is a triumphant song of carrying on and overcoming the odds. It was also taken on by rude boys because of the song’s protagonist being a kid from the ghetto rising up and taking “what’s his”. The song both parallels the movie’s theme and is one of Cliff’s most autobiographical songs. Its placement in the middle of the album, following the sweetness of the Maytals and just prior to the tragic warnings in “Johnny Too Bad” and “Shanty Town”, gives the song an entirely different feel than when it appears as the album’s positive and uplifting closer.  This song has gone on to be as synonymous with Cliff as “Legalize It” is with Peter Tosh and has been covered by bands as diverse as Madness, Joe Jackson and Jerry Garcia.

To say that this is a great album is an understatement. This album is a perfect starter album; an album that you would give someone to introduce them to a style or genre; Kind of Blue or Headhunters would be ideal jazz starters for example. It’s one of those albums that can be interactive with the listener (especially when combined with the film) drawing them in to all the lyrics and intricacies of the melodies or it can be perfectly content resting in the background, providing a free flowing easy going soundtrack to your activities. The Harder They Come is time capsule and is the perfect album to introduce early ska and reggae to somebody. Everybody knows someone who has Bob Marley’s Legend (and if they are really feeling groovy, its follow up Natural Mystic) and that is their total exposure to reggae (not counting any Shaggy tunes of course). Give this album to them. In fact, give this album to anyone who thinks that ska came from reggae and not the other way around. It’s not only a great listen, but a wonderful history lesson.