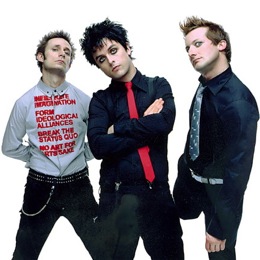 Rewind to the summer of 2003. Green Day had just wrapped up touring behind Warning and returned to the studio to work on their seventh studio album, Cigarettes and Valentines. Just weeks before the album was to be completed, however, an unknown individual broke into the band’s studio and stole the master copy.

The legendary punk band would later call the incident a blessing in disguise. With producer Rob Cavallo declaring the material as mediocre at best, Green Day decided to start from scratch, which eventually resulted in the chart topping American Idiot.

Seven years later, the legendary punk band finally looks to be revisiting the lost album, as they recently debuted the title track during their August 28th gig in Denver, Colorado.

Frontman Billie Joe Armstrong introduced the “brand new” song with an equally huge announcement that the show was being recorded for a new live album. So if you’re looking for a reason why “Cigarettes and Valentines” was played, that’s probably it.

Then again, maybe Armstrong has just been in a particularly philanthropic mood. In addition to “Cigarettes and Valentines”, Green Day also performed an unreleased cut called “Olivia”.

Per Green Day Authority, you can watch videos for both tracks below. There’s no word on when the aforementioned live album will be released, but we’ll of course keep you updated.