Watch: Parlovr put “Pen to the Paper” (CoS Premiere) 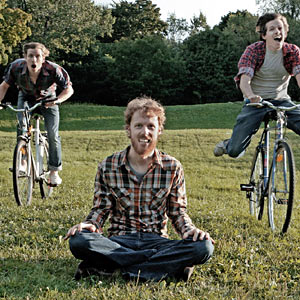 In case you hadn’t noticed, we recently added a Premiere tab to the main page. Here, you can get instant access to all the fresh new songs and videos we debut before everyone else. And what better way to celebrate getting organized than by adding a new CoS Premiere in the form of a video for “Pen to the Paper” from Montreal “sloppy pop” band Parlovr (pronounced parlour; crazy Canucks).

Canadians are known for being a little behind on things. In the case of Parlovr, they’re still stuck in the era of late to mid-’90s power-pop, like a north-of-the-border Fountains of Wayne (but, you know, like way less stoked about it all.) They’ve taken the punk/DIY mentality and added lots of bright globs of pop to the mix to make something that’s far from innovative, but pretty darn close to being way too fun for their own good. And if having too much fun is your thing, then this video is right up your alley. Unless you don’t like flag-twirling, fireworks, and moshing with old people in the woods.  If you don’t, we don’t want you here anyway.

Enjoy the video below. Parlovr’s self-titled album is available now and a new EP is scheduled for release this fall. Stay tuned for more news and release info as it’s announced.