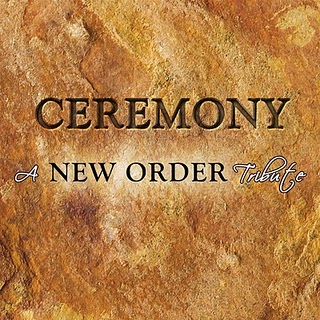 In the 1980s there were few bands quite as successful as English band New Order. The way New Order was able to forge ahead after the tragedy of Ian Curtis’ death and create their own successful path separate from Joy division was admirable and has been rarely seen or met since. While in my books Joy Division certainly supercedes New Order, there is no denying that New Order not only ushered a whole new genre of music into the limelight, but also influenced a broad spectrum of bands.

Now 30 years after New Order formed, Florida-based independent label 24 Hour Service Station has released an ambitious double album tribute to New Order called Ceremony – A New Order Tribute. The album is dedicated to Factory Records co-founder Tony Wilson, who had a major hand in New Order’s success, and part of the proceeds of the album sales go to Salford Foundation Trust’s Tony Wilson Awards. It’s a great cause and idea, but in the end the album falls a little flat to my ears.

All the bands on the tribute list are lesser-known bands from the US and the UK, with a heavy lean toward the state of Florida. Now this shouldn’t be an instant detraction from listening to the album, but the fact that most of the covers are lackluster should be. I don’t think that’s a fault to the bands being lesser known, but more so to their ideas for the covers. To be fair just because of the sheer volume of covers on the album (double album in this case equals 32 songs), the odds are high that there will be a few duds. In the case of Ceremony, however, the duds out number the good ones.

There were a few covers that did stand out as exceptional. The Dark Esquire’s version of “Temptation” gives the song a kind of Arcade Fire epic-ness meets Postal Service vocals turn that makes for a fantastic listen. Indie rockers The Dark Romantics slow down “Crystal” a touch, and give it a dark desert night sound that would be a perfect soundtrack to a cold night’s drive. Xoxo’s take on “Every Little Counts” strips away the electronic cymbals and string plucks of the original and relies on acoustic guitars and actual drums to create a gorgeous Britpop track that is still fairly faithful to the original. The child band of Yes but No pull out an amazing take of “Ceremony” that is not only good but mind boggling since the two girls singing and playing guitar are 10 and 13 years old. It’s a beautiful and rocking version, and shows me that these two girls— Brianna and Skylar Ward – are infinitely cooler than me.

Overall, the album has a great cause and idea behind it, and I fully support a tribute to a band that paved the way for most modern bands, but it would’ve been better as a single album with just the best songs on it. A 32-track double album is incredibly ambitious—and by the way there is a digital only release that has an addition 28-songs on it. The number of duds out ranks the 4 or so great covers. It’s worth seeking out those songs, but I wouldn’t waste your time on the entire album.