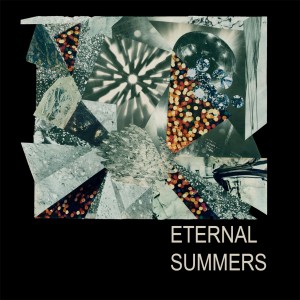 Vocalist/guitarist Nicole Yun and drummer Daniel Cundiff of Roanoke, VA call themselves Eternal Summers, though their debut record, Silver, isn’t as oppressive as the sunburns and dehydration that band name might imply. This isn’t Tattooine. Instead, it’s more like Endor: hot, certainly, but more temperate, more enjoyable… What was I saying? Oh, right: This album is a batch of warm, fun, enjoyable jams that will tide you over ’til next summer.

The first track of the disc, “Disciplinarian” unfolds in that cute, slightly surfy, female-led pop way that a lot of recently great songs have. Where others get too sugary, this one has a little edge; where others bury things in fuzz, this one looks straight ahead. They build those components into a formula that makes their music familiar without aping any particular sound or style. Yun’s guitarwork is proficient without being showy, Cundiff’s drums unflinching, driving. The hook is great, too, which is always a plus. “I Know Now” follows that leader, the quick, precise guitar line pulsing away, Yun’s vocals wavering and following the chord progressions simply.

The first few songs pop off like bubbles: quick, shiny, fun, short-lived. Lead single “Pogo” has a very surf chord progression. A line like “In a pogo life, everything’s alright when you’re wasting time” proves just how much of a head-rush this song is. It really should go into the books as the definition of a single. It’s short, strikes quickly, never stops being fun, and ends before it wears out its welcome. “Eternal” is perfect dream pop, floating in on maracas and sparse drumming, Yun’s guitar chords chopped like a good sixties pop tune. The slightly major chord change onto the chorus is a welcome breeze. It even sounds like Cundiff adds some low-end background vocals to the outro, adding a great depth to the mix.

The stutter start of “Running High” echoes Deerhoof, but the somewhat bland punky pop that follows is somewhat skippable, if not for Yun’s engaging, sincere vocal track. The guitar line on “Safe at Home”, meanwhile, hooks into that same old-school pop format, left to air out on a clothesline. Cundiff takes over lead vocal duties on the smokey, lazy, surf-pop “I’ll Die Young for Rock ‘n Roll”. It’d be a high compliment around here to say that it reminds me of Best Coast’s washed out, hazy, weed-happy jams, but it’s definitely a well-deserved one. “If you’ve got direction, I could sure use some,” Cundiff intones, “But if you’re just like me it probably just points to having fun.” Best Coast made lazy, indie surf pop into an art, and this is just the next wave off of that ocean. It’s not a copy-cat, it’s not unoriginal, but the similarities are certainly there.

The salt in the title of “Salty” is presumably the stuff out in the ocean, but there’s also a sense of sadness about the repeated, impeccably simple guitar riff. “Want you to know now, how it’s gonna be,” Yun drones, “I’m your forever girl, you’re a part of me.” There’s something cockeyed about being told something like that, but the tune washes over beautifully. Later, “Dye” is one of the more fun tracks of the bunch, Yun’s vocals warbling while the same chugging guitar and thumping drums pulse forward. The title track charges forward thanks to Cundiff’s rapid-fire tom beat, which, clocking in at just under four minutes, seems expansive compared to the suite of two minute songs that precede it. The near six-minute “Bully in Disguise”, then, slows that pace even further. Luckily, Yun’s epic harmonies and feedback outro more than make the time worth it.

Silver is a great pop record. It follows its own formulas wonderfully, without becoming formulaic, as oxymoronic as that may sound. The sounds and songs are simple, straightforward, floating out as if by accident, though it’s also clearly and meticulously planned.