John Legend & The Roots – Wake Up! 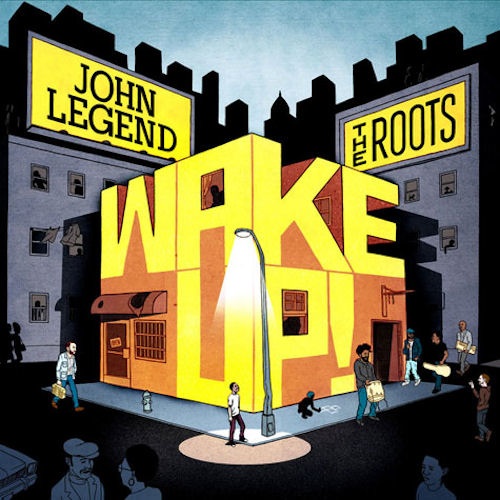 Just a few months after releasing How I Got Over, their ninth studio album and a masterpiece of jazz, funk, soul, and rap blended to create arguably the catchiest and most insightful hip-hop release of the year, The Roots return with John Legend for Wake Up! While their collaborative tracks on How I Got Over (“Doin’ It Again” and “The Fire”) were seemingly lost on me under the shuffle of grander tracks and other collaborations (Jim James, Joanna Newsom), the soul, funk, jazz, blues, gospel, reggae, and even a little rap on this album is less somber and more mighty, a blaring effort of righteous power that harks back to an era of simplicity and pride that sees The Roots and Legend evolve rapidly.

For all their talent, the band will always simply and conveniently be known as a live hip-hop band. Perhaps in a way to demolish that apt yet restrictive label, the focus of this effort is less about rap and more about ’60s soul covers built on tight instrumentation. “Compared To What” could have been a soul classic, the kind of funk-tacular, loose-played jam of an everyday narrator looking in on his world and painting a picture of degradation and hope for change while evoking a rhythmic, free-flowing indignation. While not a soul classic, the cover of “Hard Times”, originally by Baby Huey & The Babysitters, is just as much about injustice but more to the tune of the band’s often rigid yet inspired playing, newly adorned with an army of flutes. Beyond these songs, the strength of the album lies in Legend’s voice, that of an old soul who understands mainstream black music sensibilities, and The Roots’ ability to blend in and let the spotlight shine not on big beats or singular feats of musical greatness but on the construct as a whole.

Of course, this wouldn’t be a Roots album without the influence of hip-hop. That genre’s injected, though, with a newfound subtlety. Donny Hathaway’s “The Ghetto Boy” is given a ‘70s spoken word sheen by Malik Yusef in the prelude before Black Thought spins a highly personalized tale of disgust, sans the existentialism of much of How I Got Over, to a near-mesmerizing  piano-powered ballad that ends with Legend as the dominant voice.  Even with a cameo by Common in “Wake Up Everybody”, a gospel-soul fusion, the song’s all about the vocal lovemaking between Legend and Melanie Fiona. Hip-hop and rap in this album are minimalized to ensure the focus is the union of the band and Legend and in order to draw lines between old and new.

Perhaps not the most satisfying moments on the album, but clearly the most jaw-dropping, a few tracks go the way of rampant experimentation. “Humanity (Love The Way It Should Be)” is a reggae-pop number that sees Legend at his most playful and inspired, with the band just as open to feeling the island rhythm. “Wholy Holy”, a Marvin Gaye cover, is a straight blast of uptempo gospel with obvious Biblical references. Its lack of additional musical infusions is a message that they’re not playing around. But of all the songs that represent the new direction on this album, the rendition of Bill Withers’ “I Can’t Write Left Handed” blows the others out of the water with its epic 11 minutes of red-hot guitar passion, a decided change in sound for all parties. As a Vietnam protest song, the song’s uninformed, borderline selfish slant speaks perfectly for this generation’s worldview and further informs the album’s social awareness campaign.

Regardless of the songs that capture your attention most, each of them are perfect examples of a band constantly working to innovate and explore the outer reaches of their sound and beyond while continuing to make engaging and relevant music. Now that’s solid.