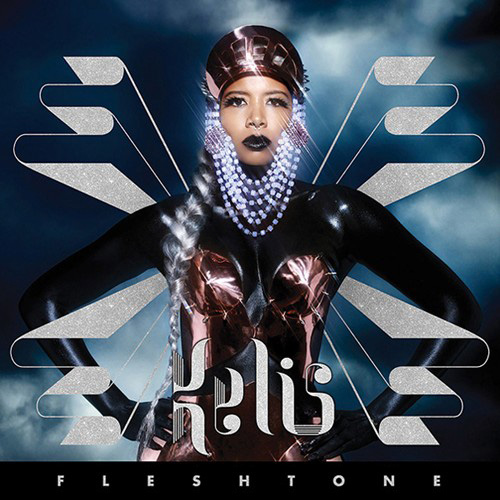 Everyone knows Kelis, but I don’t personally know many who devoutly listen to her albums. She has been a sweet and savory shark in the water of pop music, from birthing an infinite number of YouTube memes with fat people flaunting their “Milkshake” moves to handling a chorus for the late Ol’ Dirty Bastard, but nothing I was privy to thus far prepared me for Flesh Tone. If Donna Summers weren’t still alive, one would swear she was reincarnated as a ghost in the drum machine and given an IV straight into “this Kelis you speak of.” I understand that Flesh Tone, being inspired by Kelis’ son, is intended to be a celebration of life…and on that note, it’s time to bathe in icing and hit the discotheque for a dance floor sonic art exhibit like nothing else.

Lyrically, there is nothing phenomenal or outstanding about Flesh Tone (“Your love is blinding/I’m already home/oh oh oh”). The beats are futuristic and surprisingly infectious; add the hand will.i.am, David Guetta, and a moderate list of others had in this album’s eventual creation after Kelis’ unfortunate game of record label hacky-sack, and the musical direction seems less of a shock. And at an economic nine tracks, one does not get overexposed or drowned in repetition like a raver with a dead binky and no way to expend his energy.

All the best qualities of Flesh Tone seem to be funneled into its sheer explosive party essence. Kelis has revisited classic disco and wound it up on layers that would do justice at a place like MoogFest. Tracks like “22nd Century” rock a Kylie Minogue sensibility, whereas “Scream” defies its namesake by coming off like a plea for optimism and kindness set to alternating soft-rock piano and dance beats; Kelis never drops the ball on her seamless rhythm here, though her vocals (which precede her own name in the fame game) tend to be locked in on a single delivery of keys that come across layered into the techno rather than sung upon it.

Production shines bright all over, giving rise to the notion that David Guetta plus will.i.am and then some Timbaland in reverse; the entire sound of Flesh Tone reflects will.i.am’s most recent work with his original outfit, Black Eyed Peas, without lapdog Fergie and the others ruining everything. I can say that it blends well with Kelis, but if this gets transferred over to too many more artists, I might need to buy a strobe light and get my eyes re-examined.

The single “Acapella” and fellow track ”Brave” are defiantly potent, laboring off of a heavy tribal bass beat and a true ’70s presence from Kelis that reinforces some of the good impact nostalgia has on today’s musical landscape; “Emancipate” could have been a Bobby Brown semi-charter, reminding us why disco and New Jack do not mix, but to tie it all up in a neat and positive bow, album closer “Song For The Baby” buttons the album’s message perfectly.

Flesh Tone may be directed at Kelis’ child, but the scope of her dance-heavy optimism and her breath of fresh air translates to everyone it touches, thereby slipping beneath the remarkable simplicity of its lyrics and doling out standard fare with a powerful meaning in the process. It’s short, succinct, and does not drill a hole in your head, but it runs the risk of going stale quickly if the trend it is riding does not expand beyond the borders of techno-pop. Alternately, it could go the way of Chromeo and ride some ’80s bliss, but that is again risky.

If I were any sort of Kelis fan, I would urge her to take on a stripped-down soul record after this just to balance it out and sharpen her teeth some more. Maybe call on Cee Lo or The Dap-Kings for a collaboration?