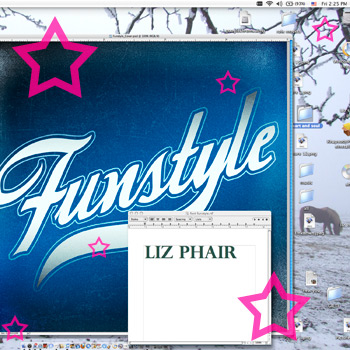 Liz Phair has returned from a five-year musical hiatus with Funstyle, an album that possesses a buttload of ammunition against the music industry and her ex-label Capitol Records. Phair is obviously no stranger to criticism; her self-titled fourth album was blasted by fans and critics alike for “selling out.” Her next album, Somebody’s Miracle, fared only a little better.

So what’s a songwriter with more than 17 years in the business to do? She releases her off-the-wall, weird fireback Funstyle, packaged with Girlysound, a collection of rarities and demos that predate her 1993 debut Exile in Guysville.

But let’s get to the current record first. Contrary to what many reviews have said, it’s not… bad. Though I’m not a big fan of Liz Phair or any coffee-house “rocker” for that matter, what I know of Phair from the 90’s resonates pleasantly in my head. But that vague knowledge is useless in this case. Funstyle takes everything you know about Liz Phair, mixes it up with oil and vinegar and hopes that something tasteful will come out of the mix.

There’s a lot to process here, and that’s part of the problem. It’s not that Phair has gone in a new direction; it’s that she has done so with a lot of inconsistency. I found myself really liking a lot of the songs in which she stretched herself and thought outside the box, taking the time to explore new genres and sounds.

For example, the opener “Smoke” starts with a lot of “fuck the industry” sarcastic voice-overs against a catchy, electronic mash-up beat. In a way, it sets the tone for a lot of the album – angst against the industry bigwigs with shameless exploration of new genres and sounds. The next song, “Bollywood”, speaks for itself: Phair raps (yes, raps) over a Bollywood beat and digresses her progression over her career. These songs aren’t bad. They prove that Phair can move in a new direction, regardless of what her label (or ex-label says).

But then it wheels wildly off track with a foray into acoustic sympathetic sap. Maybe “You Should Know Me” is something the die-hard Liz Phair fans are holding out for, but it’s a downer after hearing Phair stick it to convention. This just sounds like something she would have done years ago and does nothing to help her plight in finding a new sound, nor does it fit with her first two tracks. Same goes for “Satisfied” and “He Slayed Her” – the former with Dave Matthews on board. They are just anemic, so-so tracks on an album that should be so much more than that.

And that’s the problem with Funstyle. It’s too inconsistent to make it anything but mediocre. She could have gone one way or the other, but she picked the middle ground, which just doesn’t work in this situation. Her new-found sound is exciting and hopeful; her old sound is still apparent for her fans– but there needed to be a choice made somewhere before this album was produced. It works individually but not as a whole.

There are some songs like “My My”, which is catchy, well-written, and honest, and”Bang! Bang!” which is a slinky, low-key song with electronic moodiness that suits Phair’s sincere vocals and provides a fitting bridge between the new and old. If only all of Funstyle was made with the same acuteness of these songs.

Then there is Girlysound, the collection of b-sides and rarities. It’s strange to hear how pre-Exile in Guysville Phair compares to Funstyle. Nothing really stands out in these sparse recordings, except for the involved “Love Song” and “Don’t Hold Your Breath”, but I guess it gives inquisitive Phair fans something to gnash their teeth on, should her new concept not appeal to them.

That’s not to say I don’t appreciate what Phair is doing here on Funstyle— she’s just gone about it the wrong way. I like the braveness she exuded by leaving her label, and I understand the consequences of branching out from her genre when it garnered criticism before. I just wish she really went balls out and committed herself to one particular sound and movement. If you’re going to say “Fuck you” to the tired conventions of the old Liz Phair, at least do so with more style and conviction instead of the hodgepodge of genres that make up this unbalanced album.