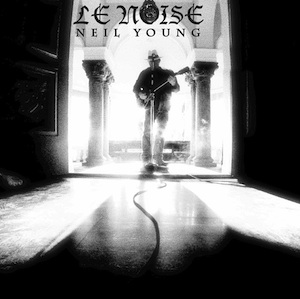 Neil Young does what Neil Young wants to do. That’s the way it’s always been. In the 80s, he made electronic records, rockabilly albums, and endorsed Ronald Reagan. In recent years, he made a George W. Bush protest album and documentary, wrote an album about his custom-built electric car, and released a sequel to a record that never came out. He’s unpredictable, and maybe that’s part of what’s so exciting about him as a recording artist. Sometimes it works, and other times he gets sued by David Geffen for making albums that are “musically uncharacteristic of [his] previous recordings.”

Through it all, there are two things about him that remain consistent: his vocals and guitar. They’re immediately recognizable as the Neil Young sound. He could strike one chord, practically, and anyone acclimated to his discography could say, “This is a Neil Young song.” But it’s been a long time since we’ve heard an album that’s largely just Young and his guitar. He hasn’t had an album quite this spare since his just-guitar score of Dead Man.

Le Noise has Young teaming with Daniel Lanois (hence the pun-tacular album title), a producer who has worked with Brian Eno, U2, Peter Gabriel, and Bob Dylan to name a few. Lanois creates a dense atmosphere with Young’s voice, guitars, and some added “sonics,” as he told Rolling Stone. It mixes together to make one of the most mature and exciting records of Young’s career.

That said, Le Noise definitely features songwriting that’s comparable to that of his recent albums. “Angry World”, for example, has a line that says, “Some will go to hell’s inferno/ For screwing up their life in freedom land.” On Living With War, a line like that would easily be written off as a grumpy old man being cynical (seeing as that album was just Young venting his anger about American politics). But, on this record, Lanois complements those lyrics with an unintelligible loop of Young’s voice over the sweet and sour distorted reverb of his guitar. It’s a mixture that works every time.

In a way, Le Noise should feel like a cheap attempt to reach out to young people. The album was promoted on Facebook, Young debuted videos on Pitchfork and Stereogum, and the record is being released as an iPad and iPhone app. It sounds like a cheap marketing ploy. Apps? Social media? Hip music sites? He’s a Twitter account away from covering all the buzzword bases. But, in reality, this is one of Young’s best albums in years, so the Internet-wide promotion is well worth the effort. With just a guitar and some fine studio work by Lanois, the soundscape here is huge and mystifying. Not since he first recorded “Cortez the Killer” has a Young album been so full of mystique.

One definite album highlight is “Hitchhiker”, an autobiography that gets into drug use and life on the road. This is a song that he performed when Harvest Moon came out in ’92, but again, it’s Lanois’ work in the studio that pushes the song over from good to great. Lanois undercuts the track with a haunting echo, and during the more nostalgic lyrics, he builds a light synth to follow the mood of the song. It’s musical storytelling at its finest.

The album isn’t all just the classic Young electric guitar sound. There are two acoustic tracks, and they’re the longest songs on the record. “Peaceful Valley Boulevard” is a long acoustic tune that maintains the hazy feel of the album. Then there’s “Love and War”, which has very little bearing from Lanois; it’s just Young and his guitar without any effects. Its repetitive nature and preachy theme make it the weakest track on the record. But Young and Lanois easily overcome one weak song with the other 32 minutes of the album.

It’s incredible that Young hasn’t already made this album. These are songs that play like he’s had them in his back pocket for years. On songs like “Walk With Me” and “Hitchhiker”, he sounds confident. As he should. The songwriting is tight, and Lanois’ production is spot-on. Le Noise stands up next to Young’s finest work. For a man who recorded Tonight’s the Night, On the Beach, Harvest, After the Gold Rush, Zuma, Rust Never Sleeps, and way too many incredible songs, that’s saying nothing but good things.