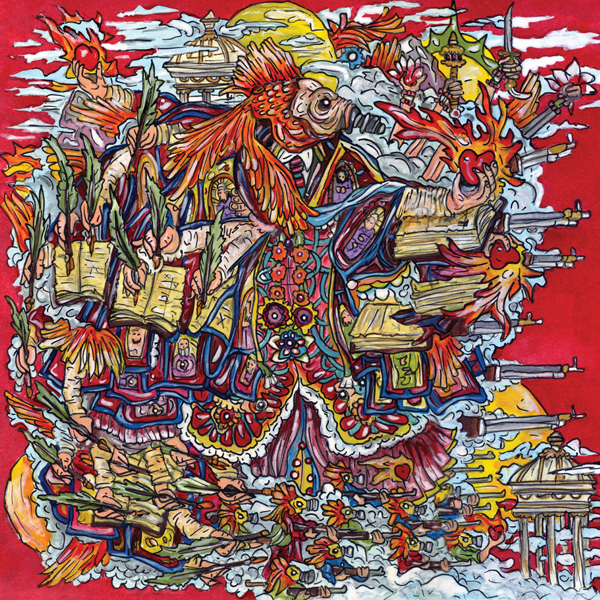 In 2006, Sam Harris published Letter to a Christian Nation, a short book that calls into question some of the ideas that religious fundamentalism perpetuates in our country (and really, throughout the world in various religious forms). But at its heart, Harris was out to question the concept of believing in anything so absolutely that one is willing to give up his own life, hurt his loved ones, and even drain our planet of its resources in the name of God. Whatever your stance, it’s hard to deny that for every Mother Theresa, there is a Glenn Beck; for every Thomas Aquinas, there is an Osama Bin Laden; for every Gandhi, there is a youth group like the one that showed me an eight-part series on how rock ‘n’ roll is evil when I was 12-years-old. They seriously played “Stairway To Heaven” backwards to “prove it.”

Like Harris, Kevin Barnes, Of Montreal‘s primary creative agent, seems to see a problem with blind faith. At least the last minute of False Priest would indicate that.

When will certain people realize- an afterlife is nothing to live for
Nothing to die for
Nothing to fight for
If those in this life are not sacred, then nothing that’s a part of it is sacred either
If you think God is more important than your neighbor, you’re capable of terrible evil
If you think some prophet’s words are more important than your brother
and your sister
You’re ill
And you’re wrong
You’re wrong.

And while I admit it is chilling to hear Barnes break down the fourth wall and tell you exactly what is on his mind, it’s hard to take the speech completely seriously alongside songs about crazy chicks throwing beta fish out of windows. Not that Barnes isn’t allowed to get serious, but his hand is heavy in all things, whether making fun music or a serious point. He had just uttered a line in a robot voice a mere 10 seconds prior that claimed, “All the white people in my neighborhood are dead.”

No, this out-of-character rant does not ruin the album, but it’s the record’s last impression. It lingers and kind of deflates the often excellent but mostly pretty damn good album that is False Priest.

Some things about the album are pitch perfect. The return to live arrangements gives an organic quality that I haven’t really heard since Satanic Panic In The Attic. The project sounds reigned in and controlled, which is a relief after Skeletal Lamping started to push the group’s druggy weirdness too far. And this brings up the claim that I have heard repeatedly made about False Priest: It is the most accessible Of Montreal album. Do people really struggle to access Of Montreal? The stretch from Satanic Panic to Hissing Fauna saw Barnes honing his pop sensibility and shooting off-the-cuff witticisms that could make you laugh and cry simultaneously. Maybe Skeletal Lamping was a tougher listen (mostly because it just wasn’t that good), but False Priest isn’t anymore “easy” or “ready for consumption” than the group’s previous work.

A lot is also being made of the appearances/friendships with Solange Knowles and Janelle Monáe. And their appearances are pretty neat, but really they are minor in the grand scheme of things. I even had to be told what songs the R&B vocalists were on to really notice. That being said, “Enemy Gene” is a fun and infectious duet between Barnes and Monáe. In a perfect world, interracial karaoke duets will use this tune as their standard (sorry “Ebony and Ivory”). Monáe plays to Barnes’ level rather than seeing him try to write for someone else. Knowles also gets a great song to work with, allowing her to really let her funky soul style loose but still within a natural turn for Barnes. “Sex Karma” and ”A Girl Named Hello” provide an excellent one-two punch and display the strongest stretch on the record (the opening songs are also very strong). Unfortunately, Barnes wrote 10 winners and then finishes the album with three throwaways. Not bad songs by any means but forgettable at best.

Lyrically, Barnes is still Barnes in every lovable way, using the religious vocabulary and sexing it up, like a creative writing project meant as much for playfulness as meaning. Is he saying that the highs and lows of our relationships give us more meaning than our religious institutions, or that maybe any belief system is secondary to our interpersonal weaving? Barnes is tongue-in-cheek so often that it feels silly to try to read too much into the concept. (He even experimented with writing while drunk for this record.) It is better to appreciate the hilarious narration of “Our Riotous Defects”, which makes me laugh every time at the “I was like ‘oh…'” line, than to try to decode any deeper significance.

“Coquet Coquette” also offers something special, sounding like an Of Montreal melody from the early 2000’s but using harsh guitar and chaotic noise rock to paint a new image of the band. For a group that always seems to be experimenting, it sounds, well, experimental. Yet, it is the single. Balls on, Mr. Barnes, I say. Which is about the coolest thing about Of Montreal. Each album pushes the group’s boundaries, pushes its fans to stay on their toes. Surely, Barnes could write the kind of album that nearly every record has flirted with being, but he will always take the sudden turn where he probably shouldn’t. Is it weird that the flaws make Of Montreal a better and more interesting band? Despite their ever-ballooning popularity, Barnes remains a creative force first, a showman at a close second, and a philosopher last. But keep trying, sir. Please.

In a time where “44% of Americans think Jesus Christ will return in the next 50 years, 22% are ‘certain’ that he will, and another 22% think he ‘probably’ will,” being told that our experience together is more important than our after-death expectations is truly radical. As are LSD-inspired, P-Funk-infused, gender-bending teen romance tales. At least we have one teacher not leading us astray.