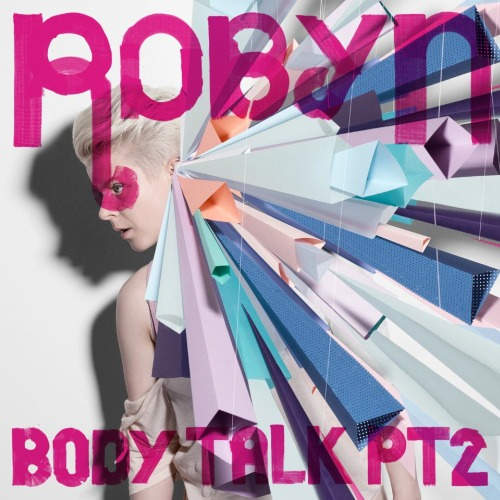 Just two tracks into Body Talk Pt. 2, the second in her trilogy, electro-dance pop queen Robyn lets listeners in on her process, singing in “Include Me Out” that “It’s really very simple; just a single pulse repeated at a regular interval.” And what do you know– the repetitive beats dripping with plenty of bass and lots of synth magic stick heavily to the formula. But while the Body Talk Pt. 1 was a great effort, Pt. 2 is in a world of shinier pop and bigger aspirations.

The resounding theme of Pt. 1 was groove-tastic love songs. The slightly techno-tinged ditties featured whirls and buzzes to accompany heartfelt songs about getting over lost loves (see “Dancing On My Own”). But for Pt. 2, Robyn’s ambition, at least lyrically, is a lot more sagely than some of the more personal tracks on her previous effort. “Hang With Me”. which was featured acoustically on Pt. 1, gets new life thanks to a pretty ’80s-friendly synth beat that plays like a New Wave Pat Benatar. That sonic upgrade really brings to life the lighter-than-air quality of her voice and enhances the story of an imperfect love affair. With a bit more oomph, “Love Kills” is a warning of the dangers of love to the animalistic rumblings of some banging drum machines. You can almost smell the fog machine in this seductive little warning call.

Unlike Pt. 1, there’s some clearly defined club hits. Sure, her tracks have always been full of pep and fun, but there’s more songs on Pt. 2 that could become big mainstream hits, something which Robyn is already familiar with. “Criminal Intent” sees the Swedish songstress channel Christina Aguilera and Peaches, complete with a beat that percolates with whimsical bleeps and bloops, all without losing her great lyricism, the highlight being, “I admit I can get somewhat X-rated on the floor, but your Honor, how is that something you get incarcerated for?”, all while dishing out a healthy sense of gimmickry. It’s almost nothing compared to the Snoop Dogg-featuring “U Should Know Better”. Here’s where a more complicated beat, reaching the heights of electro-rock head nod-ability, makes the effort standout. Much like “Don’t Fucking Tell Me What To Do”, Robyn cuts loose, abandoning a lot of the depth and instead going for a straight shot of electro goodness where she matches wits with the Doggfather.

Always one to keep it interesting, Robyn throws a mean curve the listeners’ way with “We Dance To The Beat”, a club-pop version of Bob Dylan’s “Subterranean Homesick Blues”, where she rattles off seemingly intellectual phrases and observations (“We dance to the beat of radioactivity blocking the exit”) to a super-monotonous beat. It’s not a stand-out like the others, but it really exemplifies Robyn’s sound: too club to be pop, too pop to be club; insightful at times, cheesy at others. However, it’s always, always good. It’s that simple.