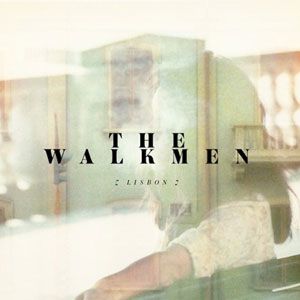 In our rundown of 35 highly anticipated albums for the latter half of the year, I discussed this very album, which we knew virtually nothing about at the time. I noted the many similarities between The Walkmen and The National, from band makeup and location, to singer-swagger and career point. But where The National continue to rise to ever increasing heights, The Walkmen have spent their last three albums holding relevance like the precious gift that it is, with no real sign of going anywhere. And no, Lisbon, The Walkmen’s fifth full-length, is not High Violet. But, honestly, I’m not even sure High Violet is High Violet.

The two records do have something major in common. Namely, that they seem to be realizations of their respective bands’ directions and destinations, realizations that took multiple records to develop. In the case of The Walkmen, this journey began with A Hundred Miles Off, their only record that didn’t overwhelmingly win over fans and media alike, mostly because it saw a drastic shift in tone from their early work. Horns appeared more often, vocalist Hamilton Leithauser seemed to relax, and the tempo slowed down. And though none of these were bad things, it wasn’t until You & Me that the band was able to focus these new leanings and create a truly great atmospheric record. Which brings us to Lisbon, where we get the polish and shine of guys who know what they are doing and finally have the experience to put it all together.

From the jangly bounce of opener “Juveniles”, there is a change that is tough to put your finger on. It’s, well…happy. And though I can’t explain to you how the vintage musical instruments that the band is fond of using really sound compared to modern ones, I can tell you that this album finally attains the vintage quality they have always been searching for. The players all sound like they are standing in different rooms, where sometimes you are listening in with one band member (“Follow The Leader”, parts of “Torch Song”) and sometimes you are in a room apart, hearing the tunes from down the hall, a trip that might have taken decades.

This is all made possible by Leithauser’s ability to croon. While it is easy to imagine him as a Roy Orbison kind of singer (my friend John Wolfe likes to point out his constant shift back and forth from Bob Dylan to Rod Stewart), and though he has the voice to stop shows when he wants, Leithauser is mostly another instrument in the mix. This may be what keeps The Walkmen from playing arenas, but also keeps their older records in regular rotation years later. The ability to sound ambient should not be overrated.

Lisbon will surprise fans in that it doesn’t contain the mixtape centerpiece as all their previous efforts have. “The Rat” and “In The New Year” were amazing first singles, but you know that there was no way the rest of the album could live up to the bar that had been raised. Lisbon takes a different approach, collecting eleven excellent songs and not allowing any to be the star. First single, “Stranded”, will not be blasted in car rides or at parties, but it is a profoundly affecting song that will transport you to scenes you have never actually experienced. A gas station on a lonely highway in 1950’s New Mexico. An empty bar where you spend your last dollar on a drink. No matter what you imagine, it will be just you, but it will be you on your way somewhere, because you’re not just stranded, you’re “stranded and starry-eyed”.

At the same time, the nostalgic vibe to Lisbon will probably be different for everyone. Sure, “Stranded” brought to mind the above imagery, but it also made me nostalgic for Christmas music that that my parents listen to. Hell, it even made me think of Three Amigos. Because the sound that Lisbon evokes might be 1000 years ago rather than just 50, there doesn’t need to be a logic to the feeling you get when you hear it. It is a rare album that is spare without being boring, allowing you the time to drift off into whatever memory or fantasy that it inspires, but never losing you to it.

Other perfect moments complete the collection: the titular yells in the chorus of “Victory” (possibly a theme song for Entourage‘s Johnny Drama?); when the full band kicks in and crescendos in “Blue as Your Blood”; the loveliness of the spotlight vocal moment that is “When I Shovel Snow”; and to top it all off, there are even a couple of up-tempo numbers. Though they also reach back to the early days of rock and roll at their core, “Angela Surf City” and “Woe Is Me” see the band finally changing gears when it seemed like that was a thing of the past.

And just when the album seems like it might have saved too many slow songs for the end (though they are all beautiful) you get the closer. Title-track “Lisbon” is deceptive as the band builds it to a mid-song climax and then kind of drift away, with each piece being removed from the puzzle individually until nothing remains. Even at the last note, there is much precision in the tunes of Lisbon, and though they are working within standards of melody and tone, they separate themselves in the surprises of each song. The rumor is that more than 30 tunes were recorded and these eleven were selected from them. Even in their editing, The Walkmen have become true professionals, finally comfortable in their own sound and now fine-tuned enough to create a masterpiece. Sure, it’s no High Violet. The Walkmen won’t ride this record’s reception and reviews to anything more than the moderate success they have maintained for nearly a decade. But, they have created something that will sound rich and meaningful outside of its time and place. And that might be better.