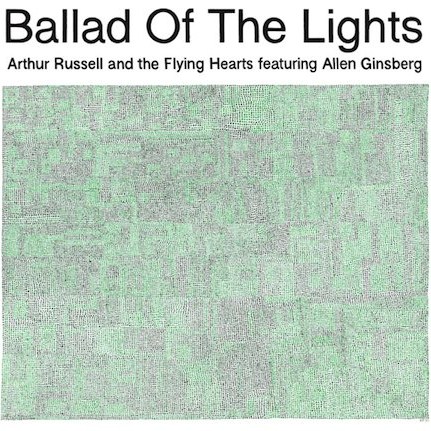 Why aren’t ancient unreleased pop recordings unearthed more often? And movies, for that matter. There must be plenty of stuff lying around that people would go for.

For example, the late downtown-NYC experimental composer Arthur Russell and his friend, renowned beat poet Allen Ginsberg, made something (along with Russell’s band the Flying Hearts) in 1977 that Audika Records dug up (via Pitchfork). And Audika will be releasing the collaboration, “Ballad of the Lights”, in partnership with Japanese label Press Pop on October 19th. The recording, which didn’t make it onto Russell’s 2008 posthumous album Love is Overtaking Me for whatever reason, will be released digitally and as a 10″ vinyl limited to 1,000 copies.

Chris Taylor of Grizzly Bear, who worked on Love is Overtaking Me and just generally seems to admire Russell, handled the digital transfers for the vinyl version of “Ballad of the Lights”. The vinyl’s B-side will be an old Russell and Ginsberg work, 1971’s “Pacific High Studio Mantras”.

To indie it up a little, Archer Prewitt of The Sea and Cake designed the cover art (pictured).