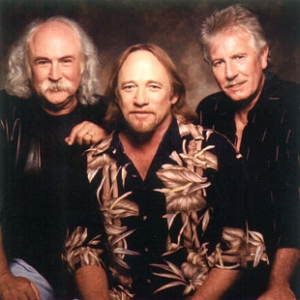 We’ve said it before, but we commend older musicians like the Pink Floyds of the world for still making music and pleasing fans. But at this point, with Bob Dylan prepared to seemingly work until his 90s, it’s hard to give Crosby, Stills & Nash any extra credit for lasting some 40-plus years. However, thanks to Billboard, we can give them credit for the seemingly amazing classic rock covers album they’ve got in the works.

In an interview, Graham Nash said the band has been working on the project for some time but had to take a break for touring purposes starting in May and on through October. While Nash can’t say when the album will be out, he did confirm they will be back in the studio early next year.

Fans who have happened to see CSN live have already gotten a sampling of some of the tracks they’ve been working on for the album, including The Rolling Stones’ “Ruby Tuesday”, The Beatles’ “Norwegian Wood”, Bob Dylan’s “Girl From the North Country”, “Uncle John’s Band” by The Grateful Dead, and several cuts from The Allman Brothers Band and James Taylor. Producing the effort will be Rick Rubin who, despite his comparative lack of experience, “has good ideas,” according to Nash.

And just like their CSNY bandmate Neil Young, the group is also planning on a couple of albums of old audio from various tours and shows. First on the burner, though, is a set to be made up of material from a 1974 CSN tour that Nash and archivist Joel Bernstein are compiling from nine shows. The plan, according to Nash, is to release that in spring 2011. After that, expect sets from a Crosby, Stills, Nash & Young show at the Fillmore East in New York City from 1977 and then Crosby & Nash shows from 1970 and 1993. Idle hands are the devil’s playground, it seems.

As always, stay tuned for more news on each of these releases as they’re announced.