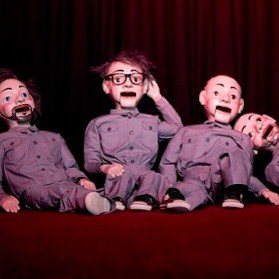 Fujiya & Miyagi, which actually isn’t a Japanese comedy duo, but rather an English neo-Kraut quartet, has recently completed its fourth full-length LP. Ventriloquizzing will be the band’s first album not entirely self-produced. The Brighton band signed on Denvendra Banhart/Vetiver/Silver Jews producer Thom Monahan for the effort, which was recorded in Sacramento and Los Angeles.

Frontman David Best assures us the album will indeed differ from previous work. Best said in a press release, “We wanted to make a record that was musically darker and had more going on than our previous LPs.” He continued, “This record is its own thing. It’s far less indebted to any past influences than our previous records and in my opinion it is all the better for it.”

If it’s any indication, the track “Sixteen Shades of Black & Blue” — check out a free mp3 at Pitchfork — is certainly dark. You can judge the rest of his comments when the full album arrives January 25th on Yep Roc Records.