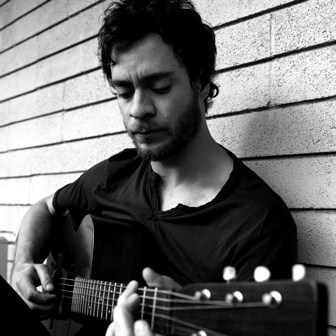 For his fourth album, Amos Lee is breaking out the big guns. The Philadelphia singer-songwriter has, in the past, been on tour with such nobodies as Bob Dylan, Elvis Costello, and Paul Simon, and evidently, he attracts legends, because he’s got a couple joining him on the new LP.

Mission Bell, which arrives January 25th on Blue Note Records, will, in addition to Sam Beam (Iron & Wine), feature the likes of Lucinda Williams and Willie Nelson in duets. Other guest artists include Priscilla Ahn, Pieta Brown, and James Gadson. Oh, and his backing band is Calexico, so on paper, it looks like we have a winner.

Calexico frontman Joey Burns produced the 12-track album, and Lee considers Burns’ work, along with Calexico percussionist John Covertino’s work, the reason for the “musicality” of Mission Bell. Lee said in a press release, “The musicality that those guys bring is just amazing….They’re great at creating an atmosphere–sonically, they brought a beautiful dimension into a lot of the songs, and helped them to expand and breathe more.”

You can interpret that as “Calexico made my album good-sounding and stuff.”

Lyrically, Lee didn’t elaborate much either, but he imparted: “There’s a real searching element to a lot of these songs.”

You can put to use your inner searching element by searching for Lee on his upcoming fall tour. His summer was a busy one which included stops at Mile High and Outside Lands, and the touring resumes September 28th in NYC. He’ll will be in Milwaukee for Farm Aid (organized by some of his buddies in Nelson and Dave Matthews) before playing a lone California gig with Chris Isaak October 3rd. After Austin City Limits on the 8th, Lee will take a month-long break and finish off with a short Northeastern trip. The East Coast dates include two seat-fillers opening for Dave Matthews Band in New York state in November and a New Year’s Eve show at the Calvin Theater in Northampton, MA.

Select shows are being ticketed through Ticketmaster, and tickets for the New Year’s Eve show goe on sale tomorrow at the venue’s website. The full tracklist is below, and tour itinerary below that.