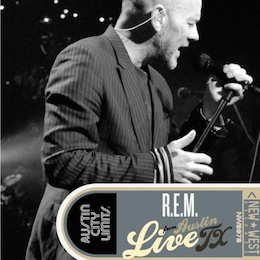 At this point in its career, there isn’t a shortage of high-quality, live material readily available from R.E.M. But anyone who is familiar with Austin City Limits knows that the performances that bands give for the PBS show are usually pretty special, granted they get the full hour. (Poor Okkervil River only got four songs.) In fact, though the live audience and television viewers get weekly treats for the yearly limited runs, it is usually the bands who are most honored to be invited and treat the shows accordingly.

Thus, R.E.M. is going to make its two-year-old appearance on the television series available on DVD on October 26th, just in time to be used as a special candy alternative for the trick-or-treaters in your neighborhood. The release is decked out with all the nerdy technical stuff that may excite you, including sound that is “remixed and remastered in LPCM stereo and DTS-HD 5.1 surround sound.” I figure that’s good or they wouldn’t have mentioned it.

But if you’re like me and didn’t see the original program, you want to know what’s on it. Well, the set spans 17 songs from the band’s three-decade-long career. While leaning heavily on tunes from Accelerate, the DVD offers three classics not included on the original broadcast: “Fall On Me”, “Imitation of Life”, and a personal favorite, “So. Central Rain”. Also found on the disc is the gorgeous New Adventures in Hi-Fi cut “Electrolite”, the really old song turned really recent song “Bad Day”, and the fail-safe “Man on the Moon”. Check out the full track listing below, and start getting excited about new tunes and touring in 2011 (via Slicing Up Eyeballs).