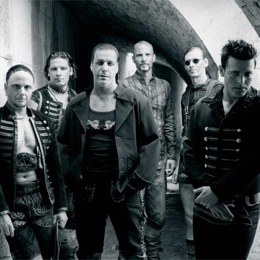 If 2010 proves anything, it is that disappearing for ten years could be the best career move for a band. Look at Pavement, who never could have anchored festivals or headlined the Hollywood Bowl in their prime. Guided By Voices also are headlining a festival when they hardly were appreciated in the mid-90’s. And now Rammstein, a band whose pyrotechnics had spurred rumors that they’d been banned in the United States, have scheduled a one-off headlining date in New York City. At Madison Square Garden.

Makers of the surprise MTV hit “Du Hast” and… uh… contributors to the Lost Highway soundtrack, the German based outfit has apparently aged well, too. It has been ten years since they played in the U.S., but their current album, Liebe Ist FÃ¼r Alle Da, sold 22,000 copies in the United States in its first week. We will see if people actually show up to their concert, scheduled for December 11th, but I know more than a couple people not in that 22,000 who will be lined-up to see this show. (Blabbermouth).

Tickets for the date go on sale starting Friday, October 8th. In the meantime, check out some insanely awesome live footage below. This, ladies and gentlemen, is why you’ll want to go: