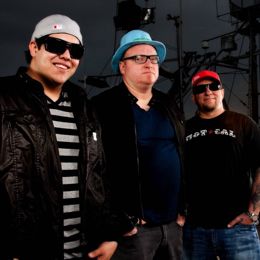 After a little controversy, Sublime With Rome spent most of the summer spreading its sort-of-new wings and entertaining stoners everywhere. Now they’re using that newly reinvigorated momentum to ready a previously announced album of new material. Plus, they’re hitting the road again this fall. Righteous!

Not a whole lot more details are available yet on their first album in some 13 years full-length debut (fear the lawsuit), but the band are hard at work at Radiostar studio in Weed, California (via ContactMusic). (Haha, Weed…) For now, they’re shooting for an early 2011 release. As to what we can expect from said LP, enjoy the song “Panic”, which they debuted on the road, as an early indicator (below).

After an uber-tiny stint in the UK, the band returns to the U.S. for a chunk of dates that start October 20th in Norfolk, VA, center pretty heavily on Florida and California, and end on November 21st in Hawaii. What a bummer.

As always, stay tuned for more details as they’re announced.