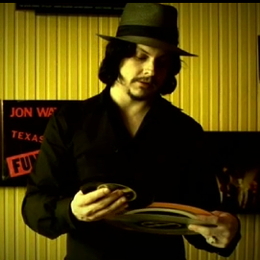 According to Third Man’s website, the Triple Decker Record is just as it sounds — a record inside a record. In the case of the newly announced 12″ single for The Dead Weather’s “Blue Blood Blues”, a previously unreleased 7″ will be hidden inside. To gain access, you’ll have to crack open the 12″ portion. No joke, especially since White offers a demonstration here.

The Triple Decker Record will be available starting this Friday, September 17th via the Third Man Records store in Nashville and the online store, though quantities are limited to just 300. For those not looking to crack open their purchases, an alternate 7” version of “Blue Blood Blues” with a double-sided cover will also be available, as will Tri Color 45s of the single. The 12” version will come with alternate B side “No Hassle Night”/”I Just Want to Make Love to You” (live). Both those releases are currently available.