The Stimulators reissue Loud Fast Rules! for the modern age 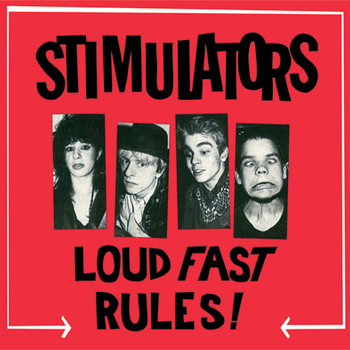 In 1977, punk was exploding everywhere, starting its move from the underground to a more popular underground. That year, guitarist Denise Mercedes heard records from The Damned, Motorhead, and The Clash, leading to her decision to return from London and start up a band in New York. After adding LES poet Patrick Mack on guitar/vocals, fashionista Nick Marden on bass, and an 11-year-old Harley Flanagan (The Cro-Mags) on drums, The Stimulators were born. Now, more than 30 years later, their only full-length album, Loud Fast Rules!, will finally be available on CD, LP, and digital for all to enjoy October 5th.

Released through Reach Out International Records (RIOR), the LP captured the band in a live recording environment, putting together a set of catchy, intense songs that did more than just stick with the punk genre. Instead, they mixed up the punk scene with metal, reggae, and old-fashioned rock to create a unique beast. You can hear for yourself below, as the album’s first three tracks are available for streaming.