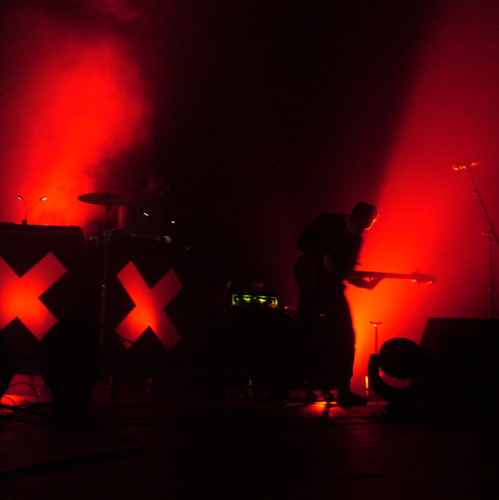 Winning the Mercury Prize means next to nothing to American audiences. Need proof? The last three to win it were Speech Debelle, Elbow, and Klaxons — none of which have gained any steam in the States after winning it. Even 2006’s recipients of the award for the best U.K./Ireland album, Arctic Monkeys, are much more popular at home than here, where they are still riding off the success of their debut.

So it’s safe to say that the xx‘s win was less a career stimulus than evidence of the trio’s meteoric rise. More evidence: Just over five months ago, the xx first played downtown Oakland’s Fox Theater as the opener for Hot Chip (as they did at Coachella the next day). Yesterday, the xx sold the 2,800-seat venue out, and it wouldn’t be surprising if Hot Chip is the opener the next time the two London bands appear on a bill together.

Oh, and better evidence: Only a few people left after “Islands”. Pretty impressive.

But this isn’t just a bunch of empty hype. The difference between the xx and a lot of the generic indie pop bands that have experienced similar growth spurts is the xx actually deserves it. Only one phenomenal album in, the band has already perfected its dark, ethereal art rock sound in a live setting and learned how to be rock stars. The charisma of bassist/vocalist Oliver Sims as he prances slowly around stage like a velociraptor is irresistible. Guitarist/vocalist Romy Madley Croft displays no such energy, but she’s on point and knows how to set the mood.

It’s easy to forget about the third member, but it’s a mistake to do so. Jamie Smith, on the MPC drum machine, is the backbone of the show. Even during the low-energy points of last night’s performance (there were plenty of them), Smith remained consistently fun to watch. At one point, he and Sims engaged in an improvised cymbal/MPC jam, which sounds strange on paper, but it was rather immersing — it’s all about the buildup.

Still, it’s how they worked together as a band that inspired more awe than any individual talents. The elevated-whisper vocals Croft and Sims have perfected will be mimicked by many an indie band in the near future. But it will be hard to replicate the cohesion. Their vocals complemented each other so well they earned enthusiastic applause any time they harmonized. The playing is also more precise than one might expect from such a minimalist band. Maybe it’s the fetishistic reliance on the echo effect, but the xx somehow manages to craft songs that are layered and sparse at the same time.

This was evident on crowd-pleasers like “Crystalised” and “Basic Space” as well as the atmospheric main set closer “Infinity”. The band of course played the rest of xx, as well as treated the crowd to its brilliant cover of “Teardrops” by Womack and Womack, which Sims said they were performing for the second time in a year.

Like opener Warpaint, which set the tone nicely by ending a great set with “Undertow” and “Billie Holiday” (a renamed cover of Smokey Robinson’s “My Guy”), the xx has a way of being interesting if not complex, and at the same time appealing to pop enthusiasts who just want to dance. It’s a middle ground that few are able to wade successfully.