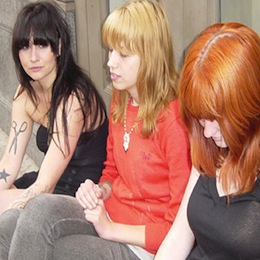 Vivian Girls never drifted far from the music scene between their self-titled debut and their less-hyped followup, Everything Falls Apart. This tradition continues to hold true now as the time-frame of their third album is announced.

Besides seeming to always be on tour, the indie-punks all have their hands in enough other projects to start their own label, but more on their label situation in a minute. Extra-Vivian activities, in fact, claimed a casualty in drummer Ali Koehler, who now claims Best Coast as her sole gig. But still, with lead singer Cassie Ramone playing with The Babies and releasing an album in November (not to mention a solo record called Zenith in early 2011) and Kickball Katy working on side-project All Saint’s Day and new solo project La Sera, which will also have a release in early 2011, the ladies understand the importance of now and are taking advantage of all the potentially temporary opportunities the spotlight can offer.

And thus, with so many side-projects in active stages, it’s mystifying that the Vivian Girls found time to write and begin recording their third effort, titled Share The Joy, which is now scheduled to see a release in Spring 2011 on their brand-new home, Polyvinyl. This puts them in the company of Japandroids (potentially awesome tour alert!) and of Montreal (potentially awkward tour alert!) and will probably cause a change in the amount of support they receive for Share The Joy’s release, one of the benefits of being on a major indie. As for the drummer situation, well, they even found time to solve that problem and now have one in Fiona Campbell (via Pitchfork).

As stated, recording is not even finished yet, but the band members are all on the side-project kick until the end of the year. I know it seems like a long time, but you’ll be bouncing around or creepily staring at a Vivian Girls show in no time.