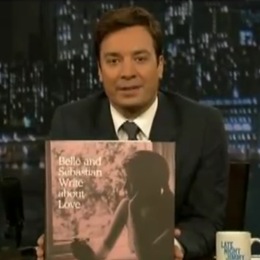 In case you were too enthralled by the Far East Movement’s Lopez Tonight performance of its Auto-Tune-heavy hit “Like a G6” to even bother giving Belle & Sebastian a chance, you now have the opportunity to do so. The ever-reliable Audio Perv has for us the Scottish rock band’s appearance on Late Night with Jimmy Fallon last night, and you can view it below.

Belle and Sebastian performed “Write About Love”, the title track to the band’s new album (out October 12th), and despite not having cool helmets like Far East Movement, Belle and Sebastian might just have topped the electro-hip-hop sensations.

Frontman Stuart Murdoch, goofy glasses in tow, is impossible to dislike; he is incessantly cheery onstage without inducing vomit (cf. Matt and Kim). Chris Geddes delivers a handy keyboard solo, and an accompanying string section provides a nice contrast to the song’s classic rock riffs. ?uestlove is in for drummer Richard Colburn for whatever reason. And, for whatever reason, the whole band is surrounded by people sitting with notepads — presumably writing about love. Kinda weird, but we’ll take it.

Update: The band also performed “Piazza New York Catcher” as a web exclusive. Watch it below as well.