Belle and Sebastian – Write About Love 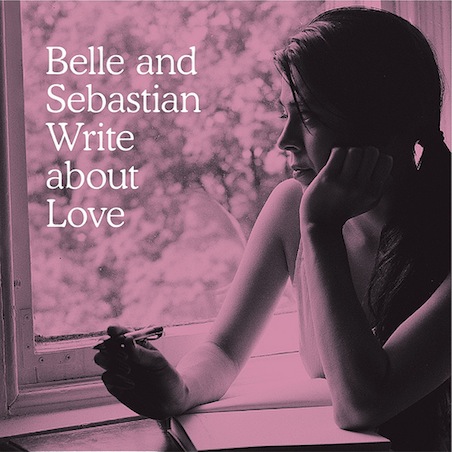 Rob is having a bad day throughout most of the movie High Fidelity, so when he comes into his record store and hears the melancholy tune “Seymour Stein” playing over the speakers, he surely feels a kinship of sorts with the song. He asks his employee, Dick, what he is listening to. “It’s the new Belle and Sebastian,”  he responds to Rob’s approval. Sad music for sad people. Later, when Jack Black (his character has a name, but he’s basically just Jack Black) informs the two that this song actually “sucks ass,” he replaces it with what I remember to be “Walking On Sunshine”. They say no press is bad press, but when an 18-year-old gets this introduction to a group whose accessibility wasn’t just a mouse click away, it shouldn’t be surprising that it took a few years to get interested in finding out who was right, the fun-loving maniac or the two sad guys.

This is the kind of picture that is traditionally painted of the Scottish group, and there are, indeed, some quite sad songs in their back catalog (“It Could Have Been A Brilliant Career” and “Get Me Away From Here, I’m Dying” stand out). But from Tigermilk to The Life Pursuit, Belle and Sebastian is actually pretty peppy and cheerful, and though they would hate to be called twee, they do flirt with it at times; they never get into Moldy Peaches or Beat Happening territory, but they serve all their bitterness with its fair share of sugar. The use of Smiths-inspired album covers probably didn’t help their image, plus they remained a media shy mystery for much of their early existence, seeming like shut-in pale poets from the great north. And then the High Fidelity thing.

I open with this point because when you listen to Write About Love, even the somber numbers have their tongues firmly in their cheeks. It is clear that the band of the 90’s is long gone, perhaps through losing two members, Isobel Campbell and Stuart David, and probably as a side affect of getting older with a fair amount of financial security. Most notable is that they just doesn’t seem sad at all anymore. “Calculating Bimbo” and the Stuart Murdoch/Norah Jones duet “Little Lou, Ugly Jack, Prophet John” both try to enact a particular tug at the heartstrings. They may not be intended to be melancholy, but they at least demand that the listener turn inward for self-reflection. And at this, they fail, due to the tongue-in-cheek lyrics of the former and the masterful performance Jones on the latter, which causes you to listen to the voice rather than the words. Though wit and humor are nothing new to them, these days the punchlines are the only things that linger after a Belle and Sebastian song concludes.

Okay? So what? So Belle and Sebastian don’t make sad music anymore; does that make it bad? Not at all. In fact, if you had never heard the band before, it wouldn’t be a poor decision to start with this album. Murdoch and suddenly Sarah Martin, who’s two numbers nearly steal the album, are masterful songwriters, who can competently cover the ground of all eras of rock and roll history without breaking a sweat. And while a seasoned B&S fan might see them in their comfort zone and falling short of the urgency of previous work, new fans may just hear an album full of pretty good songs.

The question that begs to be asked is whether you can fault a band for not being quite as good as they used to be. Write About Love won’t turn heads, and it won’t add anything to the Belle and Sebastian mythology besides more tour dates, but it doesn’t take anything away, either. M0st disappointing is the fact that the T.Rex influence that popped up on The Life Pursuit tracks “The Blues Are Still Blue” and “Sukie in the Graveyard”, which could have paved the path for an exciting new direction, is gone and seems to be abandoned in favor of the 60’s pop nostalgia that made Dear Catastrophe Waitress equally as shrug-able.

Not that the effort wasn’t there. Besides getting Jones to contribute in a not completely successful but enjoyable tune nonetheless, we also get the appearance of Academy Award nominee Carey Mulligan on the title track, which literally sounds like “Born To Run” being played at a Supremes concert. Mulligan fits the aesthetic of Belle and Sebastian’s  traditional female parts perfectly. And with Martin’s foot-tapper “I Can See Your Future” and best-in-show winner “I Didn’t See It Coming”, the audience is left wanting a solo-project to see what else the singer has to offer.

But in the end, when I click to Consequence of Sound and I see a list of the 100 Best Albums of All Time, it is hard to forget that this band began their career with three records that could be on that list without much question. And Write About Love could not hold a candle to them. Then again, most albums couldn’t. Your impression will depend on your expectations, which if kept reasonable, could result in a pleasant listen, with the record commenting more on the mediocrity of most music today than the excellence in itself. Either way, it is deserving of attention, unlike the chance that Jack Black gave in the record store. Mark another victory for the mopey nerds.