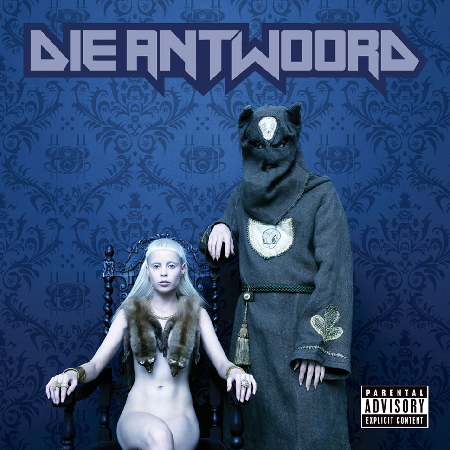 The reason you need to be familiar with the definition of zef is that it’s a phrase you will no doubt be seeing in the future. It’s time you drop the “Die Antwoord had a cool sideshow song on the internet once” mindset and adopt a train of thought with more permanence. Leading man Ninja has made it abundantly clear – Die Antwoord is here for good. And release of their major label debut, $O$ is only further proof.

The thing is packed to the brim with big ideas, and even bigger sounds. Let’s get one thing straight: this is a pop record. Their viral hit “Enter The Ninja” is predominantly a rap joint, and $O$ has more than its fair share of rhymes, but on the whole, this is an album full of eclectic pop music, the likes of which won’t be found anywhere else.

But as we all know, pushing the limits can have fatal consequences. You can fall flat on your face in true 808’s & Heartbreak fashion, or you can go Stankonia and hit quadruple platinum. Either way, you tried something new, and everyone respects that, but rarely is there a middle ground in highly experimental hip-hop/pop; it’s an all-or-nothing affair. And fortunately, Die Antwoord’s major label debut throws them on the successful side of the fence. This is an album that will not only make your regular rotation but will also serve as the jumping off point for much better things to come.

It’s apparent where the album is headed the second the beat drops on the first track: “Jealousy makes you nasty, in your face!” Truly, if “in our faces” is what they were going for with this one, mission accomplished! It’s gritty; it’s abrasive, but at the same time, it’s perversely pleasurable. You remember the first time you heard Eminem’s “My Name Is” and thought, ‘What is wrong with me?” You thought, “This guy is rapping about the most obscene things and telling me to do everything my parents told me not to do, all in one verse, and I love it!”

Why is this disgusting, offensive rap so attractive? We may never know. But Die Antwoord brings similar emotions to the surface during its opening track and throughout the rest of the album. Epic tracks “Beat Boy” and “She Makes Me A Killer” are at times so grimy, you literally have to rewind the album just to make double sure you really heard what was said.

And it’s not just grime that sells this album. Anybody could get in front of a mic and say disgusting things, but it takes a truly gifted individual to do so with poise and class, and an even more gifted individual to do all this over music so catchy it’ll be stuck in your head for weeks to come. Both Yolandi Visser and Ninja have a knack for this aesthetic, and they flaunt it for all 51 minutes of this album (aside from the six minutes of static to hide the bonus track at the end of the album). Yolandi shows her true rap-self on the tracks “In Your Face”, “Wat Kyk Jy?”, and “Evil Boy”, which instantly calls to mind the off-the-wall style of recent sensation Nicki Minaj. Yolandi has truly come into her own as an artist, and it’s all sort of happened in the past year.

But the real fireworks hit when Ninja is at the helm. The brains behind the operation, Ninja throws down heavily every time he jumps behind the mic. It’s truly a spectacle to see this artist conjure the spirits of Slick Rick and Eminem as he laces in and out of busy beats with his infectious rhymes. His performances are what truly make this album a cut above the rest: the proverbial nail in the proverbial coffin, solidifying the group’s place in the world of contemporary music.

We may not ever understand just what they’re about, or even what they’re talking about (a decent portion of their lyrics are in Afrikaans slang), but one thing will remain abundantly apparent: Die Antwoord is for real. It’s dark and it’s strange, but this release unapologetically lays to rest any questions anyone may have had about their staying power. Internet sensation they are not. Try hip-hop’s newest underground darlings.