Mavis Staples – You Are Not Alone 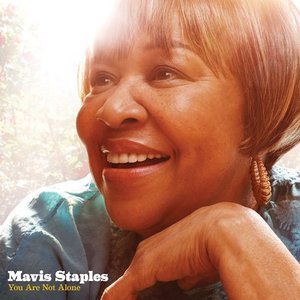 Mavis Staples is a national treasure. While recording with The Staple Singers, she recorded some of the greatest “message music” songs of all time on Stax. Her solo on “The Weight” was a highlight of The Last Waltz, which is saying something. She can tell personal stories about Dr. Martin Luther King. Word is that at the Newport Folk Festival one year in the ’60s, she, her family, and Bob Dylan drove off in the rain, leaving Johnny Cash behind since there wasn’t enough room in the back seat. Three years ago, she was the sort of music legend who, like fellow legends Charlie Louvin or Ornette Coleman, would garner smallish crowds at Bonnaroo. Today, she’s got Jeff Tweedy producing her, which means You Are Not Alone is getting her more attention from music blogs than she’s ever gotten before. And it’s an album that merits the attention.

That’s not to say that this is a Wilco album with Mavis Staples on lead vocals — it’s a quintessential Mavis album. It’s got the American roots that any good Staples album should, and it’s definitely got the gospel feel. But Tweedy’s influence on the record is clear. Take the title track: It’s got the same slow minor-to-major chord shifts and reverence as “Jesus Etc.”, for example (and it’ll be a miracle if you don’t have that song stuck in your head after hearing it a couple times). In a song like “In Christ There Is No East or West”, it’s got that rootsy acoustic guitar feel. It’s an album that certainly sounds like Tweedy had his hands on it.

However, to imply that it’s solely Tweedy’s fault that Staples’ new album is so good is a fallacy. Give the woman her due– she has an incredible voice. There’s a reason why Staples Singers tunes like “Respect Yourself” and “I’ll Take You There” were so powerful — she’s got the perfect voice for the messages. It’s empathetic, it’s powerful, it’s soulful, it’s touching, and it’s wise.

And in addition to Tweedy’s writing, production, and accompaniment, Staples got to record with her own band: guitarist Rick Holmstrom, bassist Jeff Turmes and drummer Stephen Hodges. Holmstrom attains that Pops Staples guitar sound, and the band, Staples’ touring band, complement her sound perfectly. As Greg Kot pointed out, Tweedy didn’t come in and stick her with a new band. He let her be herself. That’s evident in songs like “Wonderful Saviour”, an old standard that Tweedy had her record in a cold stairwell (where the echo suits the song perfectly).

Some of the gospel songs can get a little stale and repetitive, like “Creep Along Moses” and the closing track “Too Close To Heaven/I’m On My Way to Heaven Anyhow” but for the most part, this album is everything a Staples album should be. It maintains a soulful groove while still sticking its neck out as message music. It’s warm. It’s hopeful. It’s American.