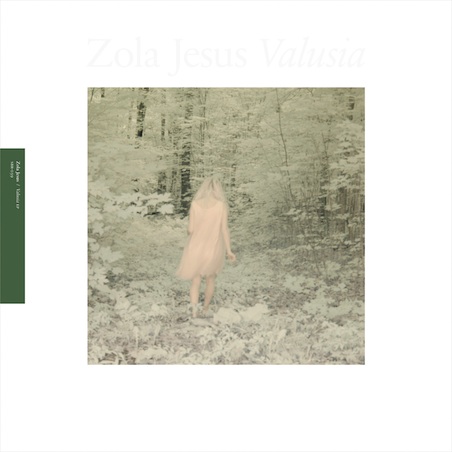 Nika Roza Danilova, better known under her stage name, Zola Jesus, has one hell of a voice. It’s no wonder that she recently supported Fever Ray in Europe –what better appetizer for the nightmarish spectacle and distorted vocals of Karin Dreijer Andersson’s solo project is there than another siren that can transport the listener to a very dark place?  Danilova’s cold operatic voice gets a workout on Valusia, her second EP of 2010.

Zola Jesus has turned away from the lo-fi production of her past in favor of a more polished sound on Valusia, revealing the nuances of her voice with greater clarity. On Valusia opener “Poor Animal”, Danilova’s voice soars as strings and a new-wave synth beat dramatically build with intensity into something surprisingly danceable. “Tower”, in contrast, marks a return to darker territory, with sinister gothic tones and industrial beats.

Old favorite “Sea Talk” gets a makeover on Valusia, and both the stunning range of Danilova’s voice and the richness of the musical soundscapes present proof that revamps are not necessarily pointless or blasphemous and can actually improve upon the originals.  Closing with the gorgeous, synth-free piano ballad “Lightsick”, Danilova wails as she asks, “Is it over?” Unfortunately for us, Valusia is, in fact, over. Clocking in at less than 18 minutes, the end comes far too soon.