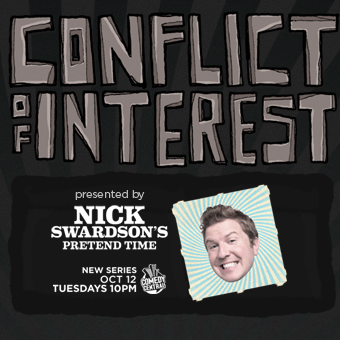 Its that time of year again. CMJ Music Marathon is back, filling New York City venues with a bevy of talent from this years indie scene. But before the festival officially got started, we decided a pre-CMJ party was in order. Thats really the best way to describe the Conflict of Interest Party that took place on October 18th at Rebel NYC. It was a party that covered all three floors of the venue, offering a multitude of drink specials, karaoke, and free swag. However, the real reason 1,500 fans piled into the club was for the eclectic selection of musical and comedy acts. While the sounds and styles were all vastly different, it proved to be the perfect way to start a week of music in New York.

The first to take the stage was the Californian band Kitten. While the electronic rock itself had potential, their name says it all: they have a lot of growing to do. Their sound was unpolished and not in that kind of indie, avant-garde way. Teenage singer Chloe Chaidez showed a plethora of energy, but sadly, there is such a thing as too much. Rolling and jumping around onstage can only be entertaining for so long. Her vocals need some work in a live setting as well.

If Kitten was a disappointing mess of electronic noise, then Oh Land was the polar opposite. With a gorgeous voice and an infectious groove, the Copenhagen singer had large sections of the crowd dancing along from the first song. Along with some assistance from her drummer, the set was made up of minimalist bleeps and bloops that expanded into vibrant electronica. Highlights included the jittering Sun of a Gun and an ode to New York called Helicopter. Theyre playing the Big Apple five more times during CMJ, so if you missed them this first time, make sure to check them out at a later show.

Despite the party being sponsored by Comedy Central, you might think it a little odd for a comedian to come in between all these musical sets. However, Bo Burnham fit right in with his musical-styled comedy. Whether it was jamming to recordings he’d made beforehand or playing live on the piano while he sang along, Burnham captivated the audience and had them cracking up at every joke, no matter how innocent or offensive. Immediately winning everyone over with his first song, which included pretending to be about to do a card trick but proceeding to chuck the cards at the audience with the simple comment of “magic isn’t real,” Burnham’s performance consistently kept the crowd in stitches. Fans should look forward to his latest release, Words Words Words, due out this week.

Dale Earnhardt Jr. Jr. was up next and what an odd group they are. While they dress like NASCAR drivers and seem gimmicky, their music is anything but that. Instead, their set was full of soulful folk that washed over the crowd. The floor was absolutely packed for the first time that evening, and nearly everyone there stopped by to hear their short set. Most of the songs played were from their Horse Power EP, but the band had enough time to throw in covers of Gil Scott Heron’s “We Almost Lost Detroit” and The Beach Boys “God Only Knows”.  The latter was a particular highlight, stripping the song down to hit the bands mold.

After Jr. Jr. came the second comedy act of the night, Reggie Watts. Theres only one word that can really describe Watts brand of humor: insane. From the moment he arrived (which took forever due to a lengthy sound check) to the moment he left, the audience experienced a full-on blast of intense improvisation and stream-of-consciousness rapping. In between songs that mocked the gangsta style of rap, Watts put on different accents and presented himself as a variety of performers. One of these was a southern bandleader who won an award over Radiohead and followed this up by making fun of Thom Yorkes vocal stylings on Kid A. These werent sketches or skits that had been planned out. Instead, Watts just took whatever was on his mind and threw it out to the crowd, winning over the entire audience and leaving everyone with a good feeling for Nada Surf.

While many of the acts made for a really fun night, most of the crowd was there for Nada Surf. Playing their last scheduled show, its unknown when the New York alt-rockers will be back. As CMJ staples – they’re playing Friday at the Mercury Lounge, as well – it was no surprise that both the band and audience enjoyed every minute of the set. Taking the stage just after midnight, the group opened with Hi-Speed Soul, creating an energetic euphoria throughout parts of the crowd. It was a sort of homecoming for Nada Surf, according to singer Matthew Caws. It turns out that he and bassist Daniel Lorca held their first practice ever in the upstairs rehearsal space of Rebel NYC. Joined by Guided By Voices guitarist Doug Gillard, the band ripped through a 90-minute set that spanned their career. It was a wonderfully rocking way to the end the show and start CMJ.

The showcase ultimately combined music and comedy into a smooth, eclectic mix that kept the audience’s attention despite delays and lengthy sound checks. It was a more than suitable way to set the stage for CMJ and whet our appetites for what’s to come.