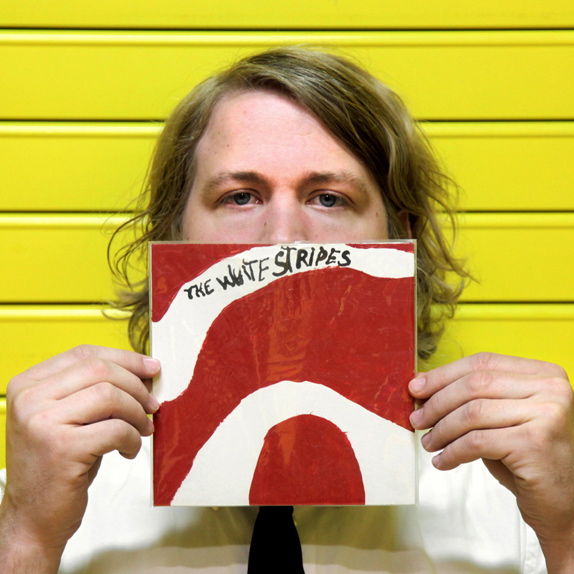 Hardcore vinyl collectors are used to paying through the nose for rare pressings, but even by those standards the price an early White Stripes single fetched from an anonymous buyer is amazing: $18,000. Yes, you read that right – $18,000. Jack White’s Third Man Records reported the staggering figure last week. We kept expecting a correction – “Whoops, accidentally added too many zeroes!” – but nope. $18,000 is the real number.

The 45 of “Lafayette Blues,” the Stripes’ second single, came out in 1998 on Italy Records (some pressings contained B-side “Sugar Never Tasted So Good,” but it’s unclear if this is one.) Due to production delays, though, the covers weren’t ready in time for the band’s release show at Detroit’s Gold Dollar. In order to have something to promote, Jack White and label head Dave Buick hand-painted 15 unique covers right before the show and sold them for $6,

Those records me and Dave Buick did when we hand-painted them…Dave said one of them went for 2700 dollars. And somebody tried to fake one and got caught and he’s not allowed to sell on there anymore. Those are some good ones. You remember that show when we painted those singles for Lafayette Blues? We pitched up six dollars for them. I remember me and Ben [Blackwell, Cass Records head-Jack’s nephew-guy pictured above] were talking, Aw that’s too much! No-one’s gonna buy it at the Gold Dollar for six dollars. Hahaha! Then we went in to sell them and you can’t pick! You had to buy the first one, and there was a ton of people standing around waiting for someone to buy the first one, because they didn’t want the first one. They wanted the tenth one. There was one with a giant picture of Meg sticking her tongue out on one of them, which Dave made. It’s funny stuff – thinking no-one’s gonna buy them for 6 dollars, now they’re going for 2700!

$2,700 is indeed nuts, but $18,000? That’s a pretty big jump in six years. Who knew that back in ’03 when everyone was throwing their money at Goldman Sachs, the smartest investment around was a garage-rock 45?

There’s one thing even crazier than this price tag though: The price tag a different copy could fetch. See, this particular $18,000 disc was one of those colored by Buick. God knows how much a White-painted one would get!

The Third Man website describes the discs as the “holy grail for White Stripes collectors” and that’s probably accurate. The holy grail for general Jack White collectors, on the other hand, is even more nuts. When White worked as a Detroit upholster, he and his co-workers formed a band called – wait for it – The Upholsters. Showing an early knack for self-mythologizing, he slipped 100 new EPs into furniture he worked on. To this day, none have been found. I’d guess how much one of them would go for, but I think my zero key is broken.