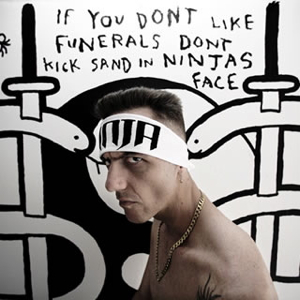 Once in a while, you get the opportunity to speak to somebody truly interesting – whether it’s your well-read Anthropology professor, an estranged uncle who did hard time, or a homeless man who decided to sit next to you on the bus. Whoever the person, and whatever the topic, you emerge having learned something new, or seen something in a new light. The sentiment isn’t always the same, however. You may leave the conversation feeling completely depressed, disgusted, or faithless toward the human race. The inverse is also possible: you may leave the conversation elated, hopeful, or excited.

My conversation with Die Antwoord’s Ninja would fit into the latter category. A person as candid and genuinely amicable as Ninja is hard to find. Philip Seymour Hoffman’s character in Almost Famous advises us not to befriend musicians just because they’re famous: “I know you think those guys are your friends. You wanna be a true friend to them? Be honest, and unmerciful.” But Ninja sort of did that job for me. He was honest, humble, and endearingly self-depreciating. There is an energy and enthusiasm in him that left me with a greater hope for the future of independent music. How could I be unmerciful to someone so (sometimes brutally) honest and genuine?