Kanye appears on Ellen, details star-studded “All The Lights” single 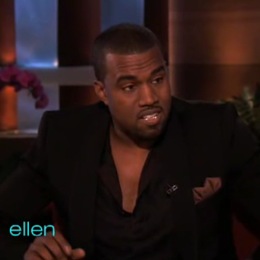 The Kanye West publicity train apocalypse continued Tuesday as the Chicago MC sat down with Ellen DeGeneres for his first television interview in more than a year. It wasn’t so much a discussion of his forthcoming album or any of his other current endeavors as it was a personal recounting of the Taylor Swift incident and the subsequent events that followed — you know, moving overseas for nearly a year. The pair also discussed Kanye’s teeth — the same ones that set off an airport metal detector over the weekend.

In much more exciting news, West is also using this week to screen premieres of his Runaway film in three different cities — Los Angeles, Chicago, and New York — before its worldwide premiere this Saturday at 8pm EST on MTV/VH1/BET. Last night was Los Angeles’ turn and like screenings’ past, West hosted a Q&A session shortly following. According to AP, the rapper revealed that the track “All The Lights” will serve as My Beautiful Dark Twisted Fantasy‘s next single and will feature a star-studded list of contributing artists. Star-studded as in Elton John star-studded. And Rihanna and Alicia Keys, too. And Fergie. And Elly Jackson of La Roux, Kid Cudi, John Legend, The-Dream, Tony Williams, Charlie Wilson, and Ryan Leslie. So, yeah.

West didn’t say when “All The Lights” might see release, but it’ll probably happen before My Beautiful Dark Twisted Fantasy hits stores on November 22nd via Def Jam.