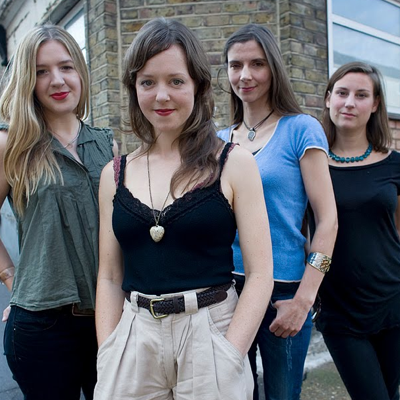 One of the brightest stars to emerge from the summer Storm the Charts campaign that sadly failed in its ambitious mission to hijack the UK Top 40 singles chart, Emily Barker continues to bring a touch of distinction to the independent music scene. Barker (lead vocals, acoustic & electric guitar) and Red Clay Halo bandmembers Jo Silverston (cello, saw), Anna Jenkins (violin), and Gill Sandell (accordion, flute, piano, pipe organ) weave a compelling sound tapestry that laces together a raft of folk-rooted influences. The girls also combine on occasion to deliver some arresting four-part harmonies.

Barker herself hails from a rustic backwater in the remote south west of Western Australia. At age 19, she grabbed a backpack and headed off to travel the world. In 2002 she got as far as Cambridge, England, where she put roots down after teaming up with local guitar wizard, Rob Jackson, going on to form a band called The Low Country. Apart from an abortive attempt to finish her degree course back in Australia and the occasional holiday, she’s been in England ever since. “It’s great. I love the UK. The eccentricities of the Brits, their quirky obsessions and dark humour, the strength of the Arts here, my friends, the countryside and my husband who is British,” Barker enthuses, while conceding that there are things she misses about Australia. “My family mostly, the Blackwood River next to which I grew up, the smell of the eucalyptus, the light, the heat, and much more besides”.

Barker’s current band is named after the Gillian Welch song of the same title. Welch’s influence can clearly be heard on Barker’s debut album, Photos. Fires. Fables. “She is a huge inspiration for me as a songwriter, and I can relate to the lyrics in that song, given I’m a country girl myself from a place where the dirt is red,” says Barker. “The ‘halo’ in the title also reflects the group, as when we rehearse and arrange music we sit in a circle, like a musical halo.” Initially released in 2006, and subsequently remastered and released in early 2008, the debut is a beguiling, eclectic collection of stories in song with more than a touch of Americana about it. Maybe it was all that traveling a while back.

Barker’s second release, Despite the Snow, followed quickly in the autumn of 2008. The record conveys an intimacy, which is at times quite startling. Recorded live in just four days, the album has a raw feel and spontaneity to it that takes you into the midst of the band. The ensemble’s playing is exceptional throughout. It opens with Emily Barker’s best-known song to date, “Nostalgia”, which was used as the theme for a BBC detective drama, Wallander, starring the iconic British actor, Kenneth Branagh (US readers can find that on PBS this October). How this came about is another example of the improbability of such career breaks: “The band and I did a bunch of house gigs to raise money to fund the album,” Barker explains. “The composer Martin Phipps was a guest at one. He came up to me after we’d finished playing, saying how much he’d enjoyed our performance, especially “Nostalgia”. He then rang me a couple of days later to ask if I would be up for having the song as the theme for Wallander, for which he was writing the score.” “Nostalgia” went on to win a BAFTA Craft Award.

Emily Barker’s new single, “Little Deaths”, is the first piece to emerge from her new studio album, Almanac, which is due out in January 2011. It’s a song about fallen dreams and upset plans, as well as a wish to lead a life filled with inspiration and creativity. The interplay between the flowing instrumentation and Barker’s bell-like vocal blend of strength and fragility is simply blissful. It embodies a songwriter who is constantly exploring and developing her craft in harmony with gifted musicians who clearly empathise with her and add their own nuances. The new album can’t come soon enough.

Want to be the next up and coming artist featured on Consequence of Sound? Submit your music exclusively through Sonicbids.