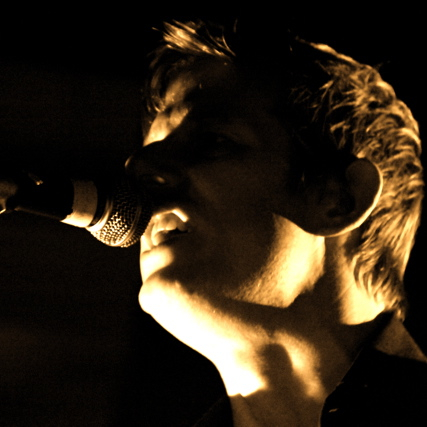 I consider myself a pretty big Spoon fan. I loved Kill The Moonlight as a first introduction, first saw them play live at a free Amoeba Records show in San Francisco for Gimme Fiction, and finally caught a full set at the Music Box a couple years back. They had a string of four albums, beginning with Girls Can Tell and ending with Ga Ga Ga Ga Ga, that I imagine have been the subject of countless midnight debates and chat-room bickerings, all holding strong cases for not only being the best Spoon album, but being no-explanation-needed classics. And on September 30th, Spoon played their largest Los Angeles headlining date yet, but perhaps not at their creative height.

You see, Spoon also has albums that are not classics. One is the Soft Effects EP. Another is their most recent record, Transference. The latter I somewhat dreaded before their performance began, because it was released earlier in the year and is what they are currently promoting. Well, no. Dreaded is too strong. Let me just say I anticipated the set to be Transference heavy and I wasnt looking forward to the songs from it, mostly because it didnt really register with me.

See, while Spoon excels in details, craftsmanship, slow burning jams and melodic genius, the knock on them is that the songs never quite become fully realized, that the same tune in other hands could take it to another level or further. But I like that Spoon songs create tension, rarely taking predictable turns to reach their payoffs. Their critics are also of the vocal opinion that Spoon is boring live.

Well, Spoon is not boring live. However, Spoon can seem boring if you are expecting fire breathing, or a magic show, or a guy in a ball rolling over the crowd, or hologram monkey-people, or the many other tools that great live bands employ for your entertainment. And yeah, I like that shit too. But if you like Spoon, you would not be bored by a Spoon concert. If you go to a Spoon concert without much familiarity and have four beers and talk to you girlfriend during the songs, it might seem boring.

Admittedly, Spoon can also seem boring when they are playing their weaker material, as they did during their surprising first encore in Hollywood. And this was after a main set that was better than Id seen them perform previously. Transference was represented but not forced down our throats and a horn section was employed for a five song stretch, including Stay Dont Go (I miss the breathy beat-box in the background, though) and Jonathan Fisk (still fires me up like nearly 10 years ago). The band even added multi-instrumentalist Jessica Dobson for help with percussion and treated the audience to a guest appearance from Largo resident/music producer Jon Brion, though I doubt more than a dozen other people knew who he was. But perhaps the best part about Spoon right now is their knowledge of what their hits are, or at least what their fans want to hear. This can be tricky when their have not technically been any hits to speak of. They know that everyone will go nuts for The Underdog, theyll be stoked for I Turn My Camera On, and The Way We Get By. In fact, most of the old tunes played I had heard them play before, except for the welcome surprise Everything Hits At Once.

And of course, the entire first encore, which was a track by track performance of their 1997 EP, Soft Effects. But honestly, I had no idea what was going on at the time. A between-set smoke had me walk-in as they started playing, so I am not sure if they made their intentions obvious or just jumped into their obscure early release. Basically, I was thinking that a.) I must really have no idea what Transference is like or b.) maybe Spoon is boring live. In hindsight, I can recognize how this was a rare treat; something that I can hold over other Spoon lovers and remind them that they missed out. Because I do that. But in honesty, it wasnt enjoyable. The fact that is was one of the two Spoon releases made on Matador and that I was about to leave for Matador @ 21 on the next morning felt like a bit of a spoiler.

The other reason that Spoon may have felt the need to show the crowd something different than their typical encore, besides practicing for the Vegas festival, was the fact that September 30th was one of the most spectacular days for live music that I had ever witnessed in a city. Besides this show, Pavement was headlining the Hollywood Bowl with Sonic Youth and No Age. This probably affected the ticket sales, as they did not sell out and attracted only a handful of photographers, but that was only the biggest competition. Jon Spencer Blues Explosion was also at the Troubadour, Rob Zombie was playing with Alice Cooper, Jamie Lidell was at the Echoplex, CoS fave Jukebox the Ghost had a show at the Echo, The Drums played Amoeba for free, John Cale performed at UCLA with Ben Gibbard and Mark Lanagan, and much more. You could have even seen UB40, Atari Teenage Riot, Jesse Malin, or O.A.R., depending on your scene. But despite Spoons noble attempt to make the evening special for the diehards that chose them over plenty of other decent acts, you cant ignore the fact that the material was just not strong for the encore and might have better suited the beginning of the show, when people are going to be excited regardless of what songs you play.

In their defense, and to my enjoyment, the band did return for a second encore, though nearly a third of the crowd departed prior. This was a smart decision and also a necessary one, as the second encore provided proof that Spoon can be an engaging and spirited live band as easily as they can seem dull. The mini-set of Dont You Evah, The Beast And Dragon, Adored, and Me And The Bean (the last two featuring a returning Jon Brion) are golden-era Spoon songs, and the fact that Spoon throws these kind of songs at the end indicates that they know it’s their strongest material. And as longs as their sets continue to incorporate songs from this era, I will keep endorsing Spoon as an underated live band that at times can overrate their audience. I was one of those on this night, but at least it wont happen to me again in Las Vegas.

Setlist:
Car Radio
My Mathematical Mind
Got Nuffin
Don’t Make Me A Target
The Ghost of You Lingers
Who Makes Your Money
The Way We Get By
Trouble Comes Running
I Turn My Camera On
Everything Hits at Once
Written In Reverse
I Summon You
Nobody Gets Me But You
Stay Don’t Go
Jonathon Fisk
You Got Yr. Cherry Bomb
The Underdog
Black Like Me
Encore 1:
Mountain to Sound
Waiting for the Kid to Come Out
I Could See the Dude
Get Out The State
Loss Leaders
Encore 2:
Don’t You Evah
The Beast and Dragon, Adored
Me and the Bean
——