The Monkees in talks for 2011 reunion tour 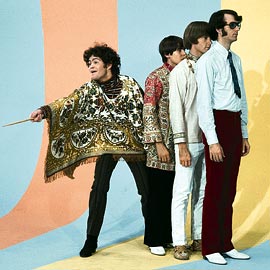 Hot on the heels of a string of reunion tours from bands ranging from Pavement to Carole King and James Taylor (now that’s a genre gap), yet another popular act could be getting ready to once more re-capture the hearts (and wallets) of fans young and old. This time, though, break out the bell bottoms and polyester jackets, kids, as we’re heading back to the swinging ’60s for this one with a potential 2011 reunion by The Monkees. Our mothers will be so stoked.

As recent as 2009, Davy Jones dismissed any chance that America’s answer to The Beatles would get back together, saying stuff like, “It’s not a case of dollars and cents. It’s a case of satisfying yourself. I don’t have anything to prove. The Monkees proved it for me.”

But now it appears Jones has changed his tune, as he recently told Aceshowbiz, “We’re talking about doing a tour next year with The Monkees. There’s talk about a show with dialogue.”

If any touring does go down, this would be first time since 1997 that all four members have shared the same stage. The reunion would also come at a pivotal point in the band’s history, just in time to mark their 45th anniversary. No official dates have been set, but stay tuned.