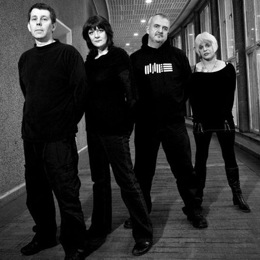 Industrial genius and Throbbing Gristle vocalist/multi-instrumentalist Genesis P-Orridge has unexpectedly departed the UK based outfit. The news was announced in an issued statement (via The Daily Swarm), which then went on to note that the band’s remaining members — Chris Carter, Cosey Fanni Tutti, and Peter ‘Sleazy’ Christopherson — “have concluded that once more, and for the time being, Throbbing Gristle has Ceased to Exist, at least as a live entity.”

Consequently, Throbbing Gristle’s scheduled performance at Archa Theatre, in Prague, Czech Republic on October 30th has been canceled. Carter, Fanni Tutti, and Christopherson have offered to perform live under the moniker X-TG for the band’s other upcoming tour dates. The trio also expressed excitement about “performing exciting new and radical electronic musics together.”

As for P-Orridge, whose split with then girlfriend Tutti led to Throbbing Gristle’s first breakup in 1981, the 60-year-old musician plans to return home to New York.

To date, Throbbing Gristle released four full-length efforts on Industrial Records. Following a 23-year split, the band reunited in 2004 and would go on to play a string of shows as well as record new music. Below, you can watch a clip from the band’s set at Coachella last year: