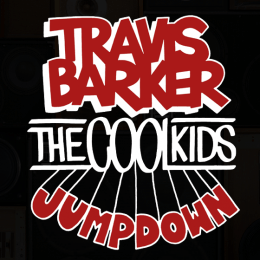 3D has been all the rage this year, with everything from the Saw franchise to the Playstation 3 getting in on the game. Now, Travis Barker is throwing himself into the mix along with the Cool Kids for their collaborative new music video, “Jump Down“. The result is decidedly meh.

First off, let’s get the technical out of the way. In order to view this video in 3D, you need those plastic glasses. Besides just picking them up in a store, fans can receive a free pair if they download an mp3 of “Jump Down” on Travis Barker’s website and share it with someone. If that doesn’t work (sounds kinda convoluted to us), you can also get them by purchasing any of the official “Jump Down” t-shirts over at Karmaloop.com.

The video itself is pretty simple, featuring Barker pounding out the beat while the duo of Chuck Inglish and Sir Michael Rocks rap over it. Friends hang out around the trio, riding around on bikes, spraying graffiti, and showing off their cars. The whole project goes for that early 90s West Coast feel and succeeds at it except for one problem. This would make for a really dull video in 3D. There’s not much that pops out to make getting the glasses worthwhile.

You can still view the video below, albeit with it being a little blurry due to its 3D nature. As previously reported, the song appears on Barker’s debut solo album, Give the Drummer Some, due sometime soon.