Watch: Wayne Coyne make a poster with his own blood 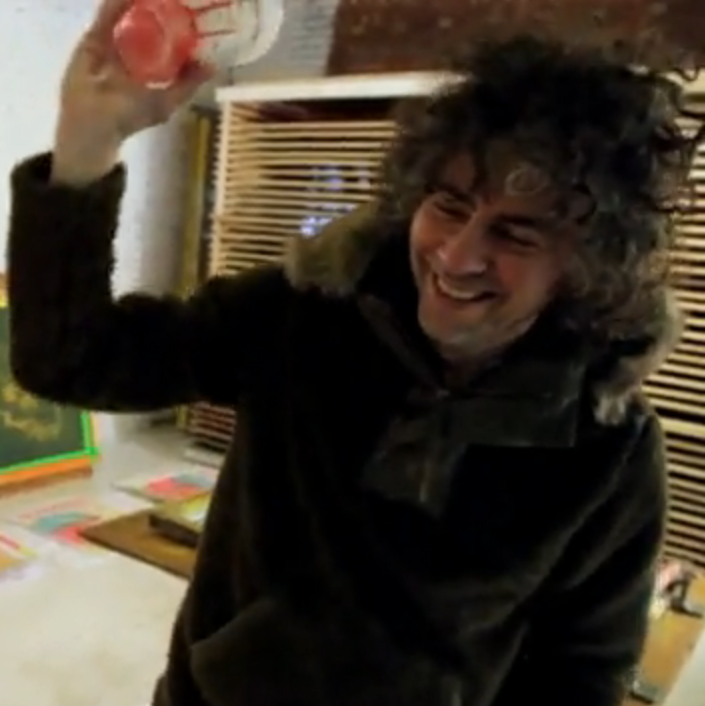 First of all, you should probably put the Apple Jacks down because what you’re about to witness isn’t exactly appetizing.  While we already knew that The Flaming Lips had some weird fetish about blood, this video (via Rock It Out! Blog) of frontman Wayne Coyne printing a poster using his own blood as ink is taking it to a whole new level.

The clip opens with footage of a nurse taking four vials of blood from the 49-year-old Coyne’s arm before taking us into the band’s workshop where Coyne explains why the band chose to use his own hemoglobin for the poster. “We thought it would be silly to use chicken blood or something,” he says while emptying the blood into a cup, “They don’t need to sacrifice their vital fluids any more than I need to.” Okay.

The funniest part happens when Coyne realizes that he didn’t put paper underneath the press. Nevertheless, Coyne recovers and even drips more of the red stuff on the poster before saying, “F*** it,” and splattering the whole thing with what’s left in the cup. He then lets the blood run onto a few other more traditional posters and finally hangs the fruits of his labor up to dry.

The one-of-a-kind poster commemorates the Lips’ 2010 Austin City Limits performance, and will reportedly be up for auction soon, but those of us without enough money to own Coyne’s DNA can marvel at his weirdness below. The band is still on tour and you can catch them at one of the dates listed below. Tickets are still available via Ticketmaster.com.