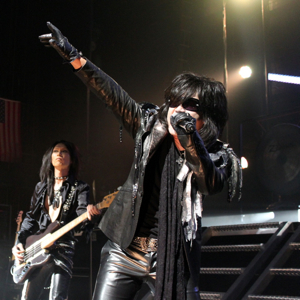 On Wednesday night, a small yet devoted audience gathered inside Chicago’s rustic Riviera, all primed to see Japan’s hottest rock ‘n’ roll export, X Japan. While most fans got their kicks back in August at Lollapalooza, any fan would be an idiot to miss this rare opportunity. After all, this is the band’s first tour through America.

Whereas they kept things short at Lolla, X Japan unrolled one hell of a set this time for Chicago. Opening with new single, “Jade”, the band touched down on several favorites (“Silent Jealousy”, for example), in addition to showing off their musical prowess on either drums or violin. Frontman Toshi kept the handful of dedicated fans in high spirits by inciting them with calls of “Are you ready?”, while multi-instrumentalist Yoshiki engaged the audience with some insightful humor. For instance, every time he said “fuck”, the crowd went nuts; what’s more, he even mentioned how he hadn’t tried the city’s pizza. However, the true touching moment arrived just before the band’s encore of “Endless Rain”, when Yoshiki admitted, “Seriously, it’s our dream come true to play in front of you guys… because of you we can still keep going.”

But let’s focus on the crowd for a moment. While relatively small – the upstairs section had been closed off, though possibly for filming – X Japan rounded up one unique batch of fanatics. Basically, the sort that don’t necessarily attend rock shows anymore. Fans teared up, some screamed, others threw up actual lighters, and one girl even brought a flameless tea light. Don’t ask. When Yoshiki dove into the audience, right after “Born to Be Free”, everyone clamored over one another to catch him. Dedicated? Of course. Obsessed? Arguably. Insane? They’re on their way. However, that’s what made it so special. Fans like this hardly exist anymore – at least in rock ‘n’ roll. People preoccupy themselves so much with what’s hip these days that they lose sight on why they listened to music in the first place. Hell, they probably scoff at the term “rock ‘n’ roll.” Not these folks, though. These fans live this music, and while we might not understand it, you gotta respect it.