by Dana Grossman and Joe Marvilli 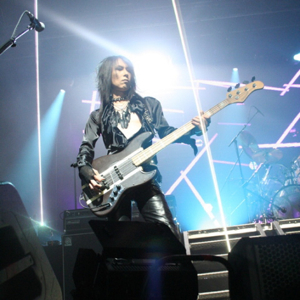 There are times when a person can get an inkling of what they’re in for with a concert before the show even starts. X Japan‘s gig at New York’s Roseland Ballroom, their last stop on their first North American tour, was one such example. As we approached the venue, we noticed something peculiar about the line to get in, which was already moving. It wrapped around the entire block.

Overexcited fans, many of them likely seeing the Japanese band live for the first time, showed little annoyance at the length of the line. If there were any frowns earlier, they were quickly wiped away with boxes of free pizza courtesy of drummer and co-founder Yoshiki himself. Really, how many bands take care of their fans like that? Even concert goers who just came off of this weekend’s New York Comic Con/New York Anime Fest (of which we’re sure there were many) were bound to be revitalized.

As eight o’clock rolled around, opening band Vampires Everywhere took to the stage. The California-based band wasted no time blasting out their brand of screamo metal. Singer Michael Vampire (really?) stalked across the stage, switching between focused singing and intense screaming. Musically, there wasnt much about the band that hasnt been done before by better groups. The performance was full of rapid guitar strumming, drum blasts, and touches of ominous keyboards. It was clear that the crowd wasnt really into it either, mostly standing around with blank stares.

Half an hour later, their performance was done, leaving the crowd standing in anticipation for the main event. Excitement and energy was already coursing through the crowd before the band appeared. Even the roadies were loudly cheered while setting up the equipment onstage. When nine o’clock hit, the anxiety only increased, with some fans nervously joking that they hoped we weren’t on “Yoshiki time” (a.k.a. the performance would be starting late). Luckily, it wasn’t long at all before the lights went down, the crowd screamed, and X Japan finally took the stage.

Whoever was standing near the front of the venue was in for a hell of a ride, as the crowd surged towards the stage when the lights went up and the music began to play. X Japan showed no shortage of energy themselves as they blasted their way through their newest single, “Jade”. If there were any doubters left, “Rusty Nail” surely converted them to believers as high-tech lasers shined around the room to match the futuristic keyboard riff.

Upon the conclusion of “Drain”, Yoshiki and Sugizo took the spotlight respectively on piano and violin for a gorgeous interlude, providing a breather to all the hard rocking of the last few songs and entertaining everyone with an impromptu “Star-Spangled Banner”. The rest of the show continued in a similar fashion, highlighting tracks from both their past (“Kurenai”) and their present (“Born To Be Free”). The entire band was in top form, clearly ecstatic to be playing in New York. Toshi’s voice soared throughout each number, reaching heights that many singers in their 20s can only dream of hitting. Yet, the 45-year-old frontman sounded like he hadn’t aged a day since their last album in 1996.

On the topic of Toshi, it was a special day for him; specifically, it was his birthday. The day didn’t go at all unnoticed by the crowd, as the entire venue launched into a rousing rendition of Happy Birthday, with many holding up signs for the occasion. To add to it all, an enormous cake was rolled onto the stage. If X Japan is going to do something, then by God, they are going to do it big.

Yoshiki was equally impressive; displaying his rapid double-bass drumming in a stunning drum solo that never became dull or indulgent. The ferocity of his playing behind the kit was only matched by his gentle, classical skills on the piano. Before the encore, he spoke to the crowd at length about how he and Toshi dreamed about being rock stars in elementary school, about the death of guitarist Hideto Matsumoto (known by his stage name “hide”), and how X Japan will keep going no matter what. It was an incredibly emotional moment for both the drummer and the audience.

All in all, despite it being X Japan’s first foray into North America, one could easily tell how much of a devoted and even hardcore fanbase they have. From singing along to every song (including the ones still in Japanese) to the screamed callbacks in “X”, every jump with crossed arms was a testament to the fact that they’ve already got a solid foundation here.

While the show was only about an hour and a half, X Japan ran across all the spectrums of what a concert could be. It was a spectacle, a singalong, a symphony of metal, and superb way to end their North American tour. While the songs were all from different periods in the band’s history, one factor remained true behind it all: The relationship between the band and the audience is one of the closest possible for a group their size. As they said, we are all part of X.