Bad Religion – The Dissent of Man 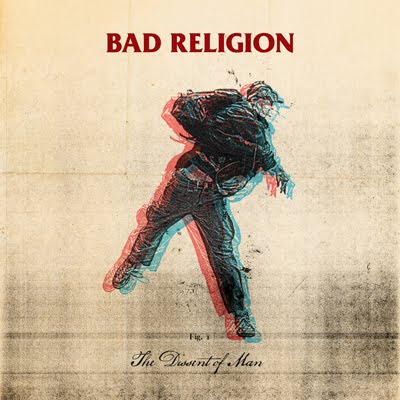 If one thing can be said about the future of Bad Religion, it’s that they are never going to run out of things to write about. In the 31 years that the California punk rock band has been around, the world has provided never-ending fodder for their socially conscious and political lyrics. Religion, war, corrupt governments, human suffering, the economy, corporate injustices, and global apathy have all been repeating subjects. Their 15th album and latest release, The Dissent of Man, follows much of the same conventions, which shouldn’t come as much of a surprise to Bad Religion fans: Why mess with a formula that works?

The Dissent of Man marks the fourth album since 2001 that has had the same line-up with no changes, something worth noting since at certain times throughout their long career, singer Greg Graffin has been the only constant member. The band seems to work at their best when there’s some consistency, as is the case with this album. Original guitarist Brett Gurewitz and Graffin take turns with songwriting duties, allowing Graffin’s soothingly monotonous voice and Gurewitz’s driving guitar work to make up the backbone of the songs.

The album starts off with “The Day the Earth Stalled” and “Only Rain”, songs that aren’t necessarily bad but don’t really say anything new. In fact, aside from their first single, “The Devil in Stitches”, a catchy and almost pop-sounding tune and the fist-pumping “The Resist Stance”, the first half of the album is fairly derivative of the band’s more uninspired albums. A fast beat? Check. Statement lyrics? Check.

However, that’s my only complaint with The Dissent of Man and a fairly innocuous one at that. Once the seventh track, “Wrong Way Kids” with its soaring “woah-oh” chorus comes in, the album really hits its stride and barrels along in guitar overdrive all the way to the end (in typical Bad Religion fashion, there’s a long tracklist).

“Meeting of the Minds” is a fast-paced explosion of a song that harks back to 1993’s Recipe for Hate. “Someone to Believe” is one of the best tracks here. It’s toe-tapping and uplifting, grinding along with the guitars and rising with the band’s famous harmonies. “Avalon” primes itself with a slow stack of dark riffs and a long drum roll before it takes off like a sonic shot. The country-twanged “Cyanide” features some genre-friendly lyrics such as “Missing you is like kissing cyanide” and is punctuated by Mike Campbell on slide guitar.

The album ends with “I Won’t Say Anything”. It’s catchy and bouncy but has Graffin’s cynicism to balance it all, resulting in a Bad Religion song that might win over a few new fans. It’s an appropriate closer to a pleasing album and leaves the listener wanting to press play all over again.

I wouldn’t use The Dissent of Man as Bad Religion’s piece de resistance (I’d point to Recipe for Hate and Suffer) but it’s a solid, well-written album with a few surprises and spins on their classic formula.