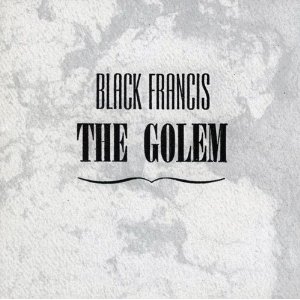 Black Francis (or Frank Black, or what-have-you) has always immersed his music in the paranormal, the epic, the mythic. Whether it was UFOs on 1993’s kinda-self-titled Frank Black, or the grand, religious overtones of “Monkey Gone to Heaven”, Francis isn’t exactly the type to worry that his themes are getting too expansive. He’s constantly searching for the connection between the human and the other, looking at our projections of self onto monsters and aliens. And The Golem seems like the perfect vehicle for more of the same, the soundtrack to a film about a clay behemoth coming to life and challenging his religious creators.

For those unfamiliar with the film The Golem: How He Came Into The World, the 1920 German Expressionist film tells the story of Rabbi Loew who attempted to protect his persecuted Jewish community in Prague by creating a giant warrior out of clay. The creature refuses, however, instead setting fire to the Jewish ghetto and rampaging throughout, until a little girl removes the sacred seal that gave it life. But, if that all sounds too baroque to match with Francis, don’t be afraid. The soundtrack is more Western than classical, the twanging guitars often reminiscent of Neil Young’s score for Dead Man.

Francis knocks out some serious, dramatic narrative here, a lot like his best Pixies days. “Miriam and Florian” lurches to life in string chord changes before a rollicking guitar solo and smooth jazz soprano sax slither into place. There’s almost an element of fantasy rock (Jethro Tull?) to the second half of the song, the guitars chugging and violin twirling. Without being familiar with the film, there are plenty of fun, familiar-sounding Francis tunes, like “Makanujo” which could be a slowed down B-side if it weren’t for the loungey saxophone over the top. The repeated chorus of “Something in the stars says that we are through” on the ballady “Bad News” drips rather than stabs.

Other unexpected instrumental choices include the honky-tonk piano of “Astraroth”, the 70s organ on “The Maharal”, and the harpsichord/maraca/bass clarinet on “The Conjuring”. The flute on “Custom All the Way” brings back more J-Tull, even if the song is a sweet, straightforward acoustic rock jam. The project relishes the unexpected, shifting genre and instrumentation at the drop of a hat. Without the accompanying visuals, some hit harder than others. The same can be said of the opposite, some pieces matching the visuals like they were made for each other, while others seem like patchwork.

While the original product is a limited edition of 500 high-detail box sets, you can also choose this pared down Rock Album version. The film and soundtrack are available on Francis’ YouTube channel as well, so no one should skip this entirely. This is just more of Black Francis doing exactly what he wants to do. There are more orchestral flourishes than one might expect, but the core is the same old Francis: guitar overdrive, thunderous drums, epic, mysterious lyrics full of obscure references.