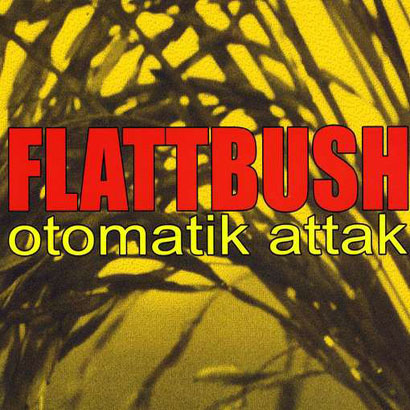 The musical genre of “noisecore” often gets a bad rap, and usually for a good reason. A lot of bands that fit into the category are more often than not just an excuse to create a lot of, well, noise. They figure you don’t need a lot of skill or talent to scream and play your instruments as fast as you can, and the results can be sonically unbearable. Fortunately, the LA band Flattbush exists to demonstrate how noisecore should be done.

And by demonstrate, I mean hit you over the head with a pulverizing wall of sound and frightening energy. Otomatik Attak starts you off with the accelerated assault of “The Sword or the Cross”. With seizure-inducing guitar riffs, pulsating drums, and the verbal beating of singer Enriko Maniago’s igniting vocals, you are primed and ready for the rapid journey through the rest of the album. Hold on tight though, because there’s little pause between songs, and they only seem to get more galvanic and intense as the album propels along at breakneck speed. There are some interesting detours, such as the bass-rattling “Oplan Freedom Watch”, and “Descontrol” which is sung (er, yelled) in Spanish by Sin Remedio’s Brenda Chavelas, but for the most part, the songs bleed together until the very end when you are left with heart palpitations and a strong urge to punch somebody.

What’s most arresting, though, is the amount of energy these guys have on their third album. Not only is their sound tireless and unrelenting, but they obviously possess some sort of driving force that the government needs to bottle and sell. It’s pretty refreshing in a music industry where so many acts seem lifeless and uninspired.

Aside from their passion and rousing technical skills, Flattbush is also a band with something to say. The politically-charged lyrics are a testament to the culture and history of the band. Enriko and his brother, bassist Arman Mangiano, were born in the Philippines to political activist parents. After a tumultuous time there, they later immigrated to California and began using music as their own weapon against the turmoil in their homeland and their assimilation into American society. As a result, the songs are not only sung in English, but also in the Tagalog and Kapampangan languages of the Philippines. Not that the different languages make a lick of difference to the naked ear – Enriko’s grating vocal prowess is nearly indecipherable at times.

Otomatik Attak clocks in at a mere 20 minutes, which would be a downfall with most artists but seems to work fine in this scenario. It’s a quick burst of octane that gets you in and out. Anything longer might have you tuning out or reaching for a defibrillator.

Flattbush is definitely not for everyone (if you have any aversion to screaming, I suggest giving it a pass); however, those more inclined to listen to Napalm Death or even Dillinger Escape Plan will be in for a kinetic treat. And if you’re ever looking to kick your caffeine habit, playing Otomatik Attak first thing in the morning might work better than any shot of espresso ever could.