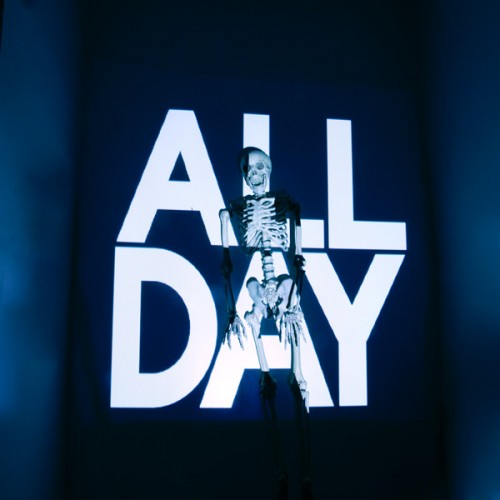 On November 15th, Girl Talk released a new album, All Day, in a way that is becoming more and more common. Rather than issuing a press release months before hand and scheduling the usual rounds of interviews and public appearances to promote it, the album just became available, rather suddenly. This tactic has been employed by everyone from Radiohead to Sufjan Stevens, allowing the artist to retain control of when and how their music becomes available to the public. It also manages to reduce hype, whether positive or negative, allowing each person to judge the quality of the work for themselves before writers can voice their opinions.

Gregg Gillis, the Clark Kent of this operation, made All Day available in a one-track format (which he says is the intended way of listening to the piece), or in a multiple track mode. (All of it for free, too.) Depending on your computer settings, listening to the multi-track version shouldn’t change anything, except that you will have a better frame of reference if you are, say, reviewing an album. All Day plays like a DJ set, with the atmosphere changing from sample to sample, but never drastically enough to turn the tracks into individual songs. Gillis is right in saying it should be heard as a whole. In fact, he is right in all his decisions concerning the All Day release. Though it may be disconcerting for an artist to be willfully giving away his art for free, I can tell you as well as anyone that it can be a necessary evil. That’s especially true when doing so helps you avoid potential lawsuits because your music is comprised solely of sounds you did not make.

As far as advanced reviews or hype, All Day doesn’t need it. You know whether you’ll like this album before you even listen to it. While people want to seem like there is more to it, All Day is a party album. A party with a sick DJ. I always get funny looks when I say this, but when I saw Girl Talk at Coachella in 2009, it was my favorite set of the festival. I am not a Sahara tent kind of guy, but Girl Talk, with all the streamers and cheerleaders and flags and confetti and surfing on a life raft across the crowd while playing Journey…It was exciting and fun, but, above all, it was new. Or, to be accurate, it was new to me. All Day is a continuation of Girl Talk doing what he does better than anyone, though like all his albums, there are some moments that stick out more than others.

“That’s Right” offers a standout segment as it delves into the obscure, or at least a nearly forgotten realm of pop music, courtesy of 90’s footnote Spacehog, whose “In The Meantime”, itself a sample-based track, is mixed with “Lean Back”, the mid-2000’s Terror Squad single that takes me back to some late nights, bartending in a hip-hop club. Nostalgia is a major appeal for sample heavy music because, obviously, it uses songs that should have a far different association than dancing in 2010. And Girl Talk hits all eras and all genres. The songs he uses are the inescapable, the tunes you could put on at a party and please everyone to some extent. But “In The Meantime”, though it was huge at the time, is one of the tunes that only someone who vividly experienced the rock music of the mid-90’s would reference.

A more interesting idea, though, is the use of samples within samples, pointing to the truth that the practice of borrowing someone’s work has been prominent throughout all of the arts for, well, forever. Whether it be Spacehog or Portishead (at the beginning of “Jump on Stage”, mised with Big Boi’s recent single “Shutterbug” ), what you sample is just as important as how it’s used. And while it may be like finding the hidden objects in Highlights magazine , figuring out what songs are featured in Girl Talk’s work results not in the discovery of music but the reliving of past hits, sometimes music that is less than deserving of a new life (Toadies?).

Whether it’s the “Layla” and B.o.B. combination in “Down For The Count”, or the extended use of the Toadies through “This Is A Remix”, Gillis is fully on point. He uses samples from a host of different rappers, showing another skill of Girl Talk, in that he not only has a good knowledge of pop music, he also knows what the best parts of the songs are. The outro of “Layla”, as anyone who has seen Goodfellas could attest, and the climax of “Possum Kingdom” are great musical moments. While Girl Talk has proven to be both a workhorse and technically gifted, the limits of his music are glaring in the creativity department. He doesn’t use music of the underground, or lesser known tracks by pop artists. While there may be rare exceptions, he sticks with mainstream pop, and for this he is the great party DJ he is. But you have to wonder if he is using his skill for the best outcome. Where his music could help people discover new artists or bring forgotten treasures to light, he sticks with the stuff everyone knows, broadening his appeal but never really risking anything or challenging his listeners.

And I think this can be proven by the fact that Girl Talk, though certainly growing in popularity, is still a fringe artist, with his fan base not coming from the pop music he relies on, but, rather, hipsters who finally have an excuse to have fun while listening to Drake or ravers who are not the most discriminating when it comes to what they’ll dance to. And these groups should continue to be pleased. I partially am. The intro to the disc is great. The conclusion is about as cliche as you can get. And even if the taste level wasn’t becoming suspicious, Girl Talk can only make these very similar albums so many times, right? He does have the ability to grow or change or innovate from here, doesn’t he?

If any of you are thinking “shut up and dance”, well, so am I.