My Chemical Romance – Danger Days: The True Lives of the Fabulous Killjoys 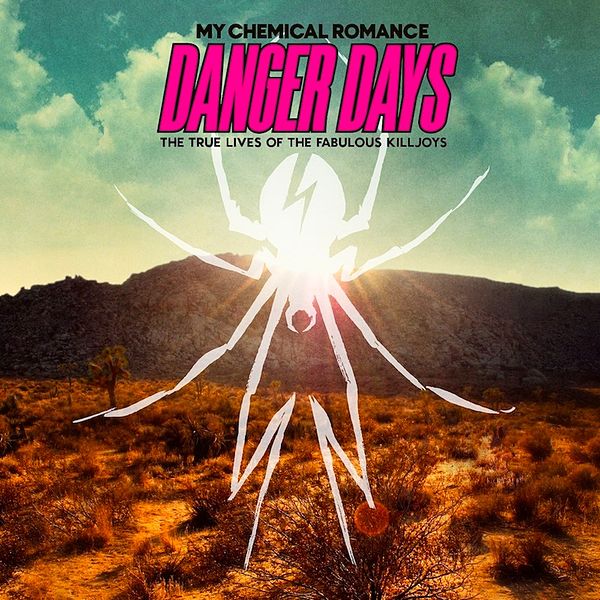 I am a really big fan of My Chemical Romance—or I was, anyway, in about 2004. Their early releases spoke straight to the darkest angst-ridden corner of my heart. Then came the big label releases and the Black Parade tour—and I’m sorry, but I didn’t buy it. There was a genuine, open-hearted quality best expressed on their first record that I felt was notably absent from their third. So a fourth album—well, it had been a while. I decided to give it a try, and I’m damn glad that I did. Danger Days: The True Lives of the Fabulous Killjoys is one of the best rock records of its kind to come out in a long time.

Radio station WKIL and pirate DJ Dr. Death lead the listener through a radio show interspersed with futuristic news reports of disintegration and the “helium wars” (not to mention the exploits of the Killjoys, MCR’s alter egos). In between these commentaries (wisely spaced out enough to avoid growing obnoxious), the tracks come on hard and fast. This is a much more accessible release than anything MCR’s done previously, enjoyable even for people who do not own any black clothing and have never worn eyeliner.

First single “Na Na Na (Na Na Na Na Na Na Na Na Na)” is catchy, and much less annoying than one assumes a song with that title might be. The garage/glam rock sound starts early with lyrics like “No one wants to die/wanna try/wanna try?” repeated ad infinitum, to startlingly danceable effect. This song doesn’t sound like what you picture when you think of My Chemical Romance, honestly, and that’s not such a bad thing. The sounds are bigger, the guitar faster and more technical, the vocals still twisting beautifully in Gerard Way’s throat but coming out more genuine, more sinister.

“Bulletproof Heart” starts off on a quiet synth sound and a high school slow-dance style intro that grows ever more captivating. It opens up into a round, fully appreciable alt-rock anthem, the sort of creature that lives and thrives on the radio. By now, you may have forgotten exactly what band you’re listening to; Way’s wide warble of a vocal range, so often used to great effect in rafter-shaking screams, here is the main reminder that this is a band you’re familiar with. It takes a few minutes to place that sound with a band that previously focused on zombie attacks and clay-mation videos; this ain’t your high school goth band. Well, okay, there’s one supernaturally-titled song, album closer “Vampire Money”, but this sucker rocks pretty hard. It doesn’t even matter what the song’s about—you’ll want to play it at a party anyway (though perhaps not your Twilight-obsessed cousin’s bat mitzvah; with lyrics like “3-2-1, we came to fuck!” this is one of the more adult things with “vampire” in the title that you’ll hear this year).

“SING” is also very open-genre, reminiscent of late 90s radio rock that seemed like it would live forever.  Another highlight is “Planetary (GO!)”, which opens with a screechy, electronic intro that beckons and intrigues. “The Only Hope For Me” offers the most classic MCR sound, but with a catchier, warmer overall sound than older tracks. Way’s voice reaches high and desperate over the ripping guitars, but this time he’s in control of the desperation, exploiting and toying with it for greater effect.